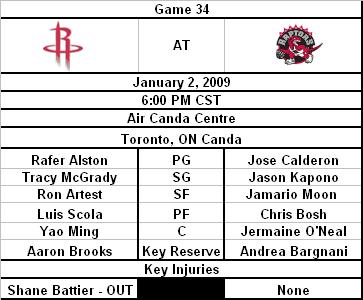 The Match-ups: I just realized this is the first of 3 back to backs. Thanks NBA schedule makers, you're fantastic! 6 games in 10 nights too, 3 of which Tracy McGrady is expected to sit out.

On a side note, the Rockets are 21-12, with the 8th best record in the NBA, with a win they'd be around 6th. Why are we so disappointed? I think it's because of the way they have lost when they did lose those 12 games. More to come on that next week.

I'm not high on this Raptors team at all. I think they are overloaded with good but not great players and they don't have their hearts in it this year.

Point Guard
Alston - Rafer is keeping his starting job with defense. It's been very solid and I like that he's playing it hard.
vs.
Calderon - Not nearly as good as they thought he would be this year. I'd venture to say that Raptors fans miss a certain former Longhorn.
Edge: Raptors - He's still better than Rafer

Shooting Guard
McGrady - I'm not going to vent here. I want to, but I'm not going to. I'm assuming he plays tonight but not tomorrow against the Hawks. That's probably good, means he won't have to run as much.
vs.
Kapono - Sat out the last game with a thigh bruise but should play tonight. I like the guy, but I'm not sure he's a starter on too many other teams that aren't deep and just need a shooter which he is very good at. For example, he would rule on the Rockets.
Edge: Rockets

Small Forward
Artest - He's becoming more and more disappointed with this team. Frankly I hope he has an outburst. One of the things I liked about him coming here is his passion. You can see it in his eyes that he is upset, now it's time to unleash the fury.
vs.
Moon - I'm not really sure why people were so excited about him last year. He's a decent player with insane athleticism. Those guys are on every pick up court in America.
Edge: Rockets

Power Forward
Scola - Filling his role extremely well. With Battier out, more offense is needed from him though.
vs.
Bosh - I thought he could carry a team, but I'm not seeing it. Maybe his best bet really is to join Lebron in New York or Brooklyn.
Edge: Raptors

Center
Yao - He needs 19 rebounds and 20 points tonight to be a 20/10 guy again. Can he do it? It will really depend on how badly the Raptors shoot, but if he gets 13-14 tonight, he'll surpass 10 per game in the Hawks game
vs.
O'Neal - Once a dominant player, now a shell of his former self. Do you think Kobe prays every night thanking God for not sending him to the Celtics for Odom and Bynum after all?
Edge: Rockets

Key Reserve
Brooks - Needs to start shooting the ball better, plain and simple
vs.
Bargnani - This guy sucks, don't pass to him! The second straight number one pick that Yao will get to destroy
Edge: Rockets

Injuries
Houston Rockets
OUT - Shane Battier, rest up sir, we are going to need you down the stretch