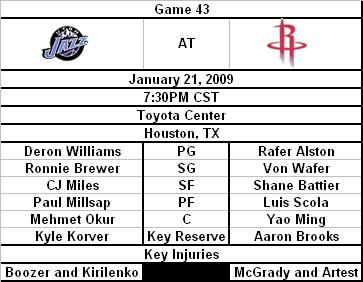 Point Guard
Alston - I knew if I talked enough trash, you'd eventually have a good game. So don't think it's going to stop today
vs.
Williams - He's the second best point guard in the league, if you argue that, then you are either a Jazz fan, or think he's the third or fourth. Either way, you are wrong.
Edge: Let's see, the 19th best point guard in the league or the 2nd best? I'm going Jazz here

Shooting Guard
Wafer - He's averaging 17 points, 4 rebounds, 2 assists and 2 steals over his last five. I'd like to take this moment to ask Tracy McGrady to sit out as long as he needs. We're going to need McGrady badly this year, but for right now, it's time to heal up so there are no more excuses.
vs.
Brewer - So here's the thing, he's a Razorback (die piggy) and a Jazz yet I still like him, that should say a lot.
Edge: Even

Small Forward
Battier - His defense has gotten better and better as his foot has seemed to feel better. It is providing just what the team needs. His stats are around what he usually has, so the fact that his defense is almost all the way back is a very good sign
vs.
CJ Miles - I'm pretty convinced that the contract he signed was for too much money, but he could be a very solid player in this league, and has been this year. I still think he should have been a Longhorn first though.
Edge: Rockets

Power Forward
Scola - He was exactly what I expected againt the Nuggets, and his heart will play out in a big way tonight. Watch for him to match or surpass Millsap in stats and hustle.
vs.
Millsap - Is he going to take Boozer's place when both of their contracts are up this summer? Jazz fans think so. And while I've only seen him once this year in a full game he put up 32 and 10 on KG, so I'd say it's not a terrible idea, especially if he is cheaper. He'll be a huge target in the offseason though and I think his money will be around the same as Boozer's.
Edge: Jazz

Center
Yao - Dominating performances are coming from him night in and night out. He will not be stopped tonight.
vs.
Okur - He always gets his points against the Rockets, but he makes Yao's job easier on the defensive end. It will clear the middle for Deron Williams a bit, but that's fine.
Edge: Rockets

My Prediction: Rockets win by 14, happy anniversary to me! When the Jazz lose tonight, they will likely be in 9th place in the West. Suck on that Jazz fans.

And yes, it sickens me how much I like 3 of the 5 starters for the Jazz tonight.