To start, I have a question for Rafer Alston. 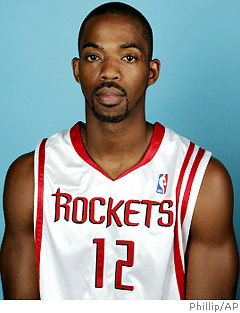 What has gotten into you?!  23 points on 7-13 shooting!?!  8 assists and only one turnover?  Given that he has done this for a week now, I wonder to myself: How is this possible? 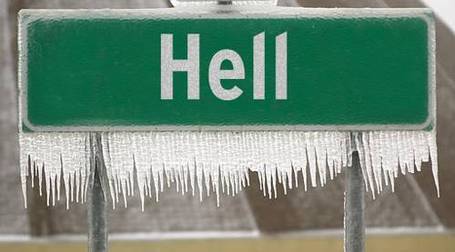 On a brighter note, the beloved Rockets stuck it to the visiting Utah Jazz tonight, defeating their Boozerless opponents by nine.  We lucked out tonight, not because Carlos and Andrei Cryalenko weren't playing, but because Kyrylo Fesenko wasn't in uniform, the guy who shut down Yao in the Rockets' first meeting with Utah.  As a result, Yao went 19/12, and had a +/- of +19.  As for the game itself, we led for its entirety, and despite 32 points and 11 assists from Deron Williams, the Jazz never had a chance, even when they cut our lead to 4 points near the end.  Why?  Because they suck.  Like Celine Dion suck.  Utes everywhere should be happy that Crazy Pills wasn't around to make this even less of a game.

Fine.  Rafer Alston -- He deserves it.  It took him three straight games of lucky shots to earn his up, but I can't deny it any longer.  23/8/4 with zero turnovers is quite a game, especially when he was guarded by steal machine Brevin Knight for a good portion of the game.

Von Wafer -- Hawk was hitting everything tonight...again.  At this point, he's expected to shoot 60-70% on a nightly basis.  In this game, the Baron was 8-15 for 21 points.  His shooting streak is almost too good to be true, because there's going to be a let down...right?

Luis Scola -- El Conquistador made all seven of his free throws in addition to going 19/9 against Paul Milsap.  I hate to leave Yao off this list, but for Luis to step up tonight like he did, that's something that cannot be ignored.

The Arc's Sanity -- Shane Battier, Kyle Korver, Aaron Brooks, and Mehmet Okur combined to go 1-17 from three.  In a related story, Rafer Alston and Ronnie Brewer went 8-10 from long range.  If you weren't aware, Brewer is a 25% three point shooter. So, um, does this mean that someone else can start jacking up threes? 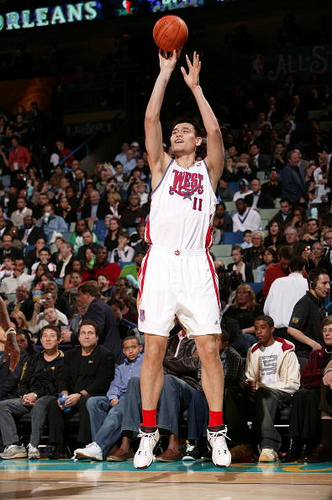 Andrei Kirilenko -- Of all games to miss, it's the Rockets game.  Guess I'll have to wait a few months until I can make fun of him in person.

Rockets Fans -- Not a single "Utah Sucks!" chant the entire game.  Not one.  Even as I yelled it a gagillion times.

Stat of the Night:

Free Throw Shooting -- Dave said it first: we rocked the free throw line tonight, going 27-28.  As for Utah, they managed to shoot only 68% from the stripe.  Having looked at every statistic, there was not much else that separated the two teams in this game.  Granted, we did light it up from three, and bench scoring was clearly in our favor, but our ability to make free throws carried us to the win.

Awkward Moment of the Night:

I love John Paul Stevenson (Rockets PA announcer), but he needs to remove this from his arsenal: [in a slow, booming, creepy grandfather voice] "That's a three point play...the old-fashioned way!"

Tonight's Beef: Morris Almond didn't get a single minute of PT -- again.  How do you leave the former Rice Owl great on the bench for the entire game?  At least get him some early minutes.  But no, leave Emo Boy (Mr. Korver) in the game to stink it up.  Shame on you, Coach Sloan.

Shout-Out to Bones: Brent Barry played a hell of a game.  He made 3 of the 4 three pointers that he attempted, and he played some great defense in 22 minutes of work.  Here's to you, Bones, for a fantastic game...and for slapping the crap out of Deron Williams: 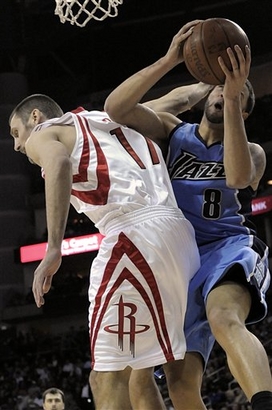