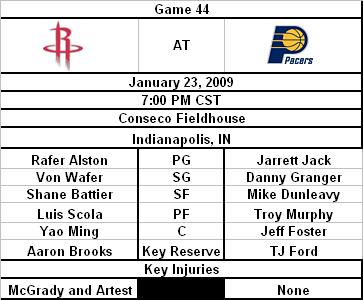 Point Guard
Alston - See the Edge portion
vs.
Jack - A solid player, but not better than his backup right now.
Edge: I'm just going to preface this, before I write it. This is bad, very bad. It's never good when I do this: Rockets

Shooting Guard
Wafer - Why do you do this to me Rick? He's dominating the game, yet when we need some offense he's not in there. Please, can this be fixed, maybe by tonight?
vs.
Granger - The real deal. The player every team in the league wishes they had picked (other than Utah and New Orleans and yes, even the Lakers regret it).
Edge: Pacers

Small Forward
Battier - Why Shane, why? I applaud you for your defense and you have to go shove your poor shooting as of late in my face? You owe me, you better be 5-8 tonight!
vs.
Dunleavy - Not as good of a player as I thought he would be, and not nearly as bad as most think he is. He's solid, though vastly overpaid.
Edge: Rockets

Power Forward
Scola - Told you he'd play Millsap tough. Murphy is not a good matchup for him on defense, but Luis could put up 25 tonight on the offensive end.
vs.
Murphy - It's simple, if his three point shot is going in he'll score 24-27, if it's not then he'll score 9 against the Rockets
Edge: Rockets

Center
Yao - Dominating performances are coming from him night in and night out. He will not be stopped tonight. That is true again for this game, so I'm just going to leave it.
vs.
Foster - Can he stop Yao? Ummm, no
Edge: Rockets

Key Reserve
Landry - Continues to give the team the energy it needs off the bench. He's doing exactly what the Rockets want him to do
vs.
Ford - My favorite Longhorn of all time. He's battling back problems again, but he's still the guy I would trade for if it could ever happen.
Edge: Pacers

Injuries
Houston Rockets
OUT -McGrady
STILL NOT SURE - Artest

Indiana Pacers
OUT - None

My Prediction: Rockets win this one close late