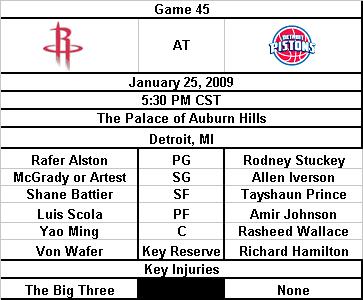 It's Sunday, I apologize for the short opening to the game thread, but honestly, I don't know what to say. Here's what we know:

Tracy recovering from poor conditioning due to his shoulder and knee injuries has been back to lifting weights and has, by all accounts, regained some strength and flexibility.

Ron Ron has been hampered by a multiple season ankle injury that needs more rest than he can get while being an NBA player to ever recover, and even then he'll always have some pain. He's been better in some areas and worse in others as a Rocket. But, given all that, the guy is in a contract year and he'll be playing the rest of the season looking to score his, likely, final contract of his career.

Yao Ming bumped knees with Shane Battier and has a bruise on his knee. He's said everything is okay, just sore and that xrays were negative for any type of break. Even so, a sore knee is bad news as it can lead to favoring a leg and putting you in a bad position, especially with such long legs.

My opinion is that unless they are 90% ready or better, they need to sit out. The Rockets are still better right now, record wise, than they were at this point last season and a ridiculously easy stretch is on the horizon. Detroit, while not the same team it has been, still plays an extremely tough brand of ball, there is no reason to run any of these guys out there tonight. Let Von Wafer have his chance to lead the team and see what comes of it.

The Rockets have said that McGrady is playing tonight, I hope he is truly ready to be back. As much as we've lamented his play around here, all of us know that the Rockets need Tracy to advance in the playoffs, it's really that simple.