In his first game back since I wrote that he shouldn't be on the court, Tracy McGrady showed up to the game and looked pretty damn healthy.  It wasn't his greatest performance, but he did look very good.  Now, if you want to proclaim his resurrection, then you're wrong.  He has yet to prove that he can do this for an extended period of time this season.  But let me say this:

I am all for Tracy McGrady leading this Rockets team as long as he is healthy while doing it.  If he is slowed down, he hurts us for all of the reasons that I have already stated in the midseason recap.  But if he can turn it on after his recent rehab, that's wonderful.  I'd be happy to have the real T-Mac back.

Ron Artest -- 4 more three pointers for Ron in this one.  In all, he had 24 points, 9 rebounds, and hit 3 clutch free throws at the end of the game.  Oh, and this was all on practically one ankle.  Tru Warier won't be denied.  Hopefully Ron can get some rest with our cupcake schedule coming up.

Rafer Alston -- I hate to defer from the true purpose of this blog, but let's give Skip even more credit.  He has played very well of late, and tonight he ran Rick Adelman's offense to perfection.  On many occasions, Rafer was in the lane kicking out to perimeter shooters, and when he wasn't passing, he was hitting open shots.  Defensively, he helped keep Rodney Stuckey in check as well.  A 14/10 night from Rafer was wonderful to see.

Luis Scola -- El Conquistador was nearly perfect tonight, going 9/11 from the field en route to scoring 21 points.  Though it wasn't his best defensive game in a long time, it can't be held against him because we were in a zone.  But throughout the game, he was driving, spinning, and hustling in the paint.  Good game from Scola. 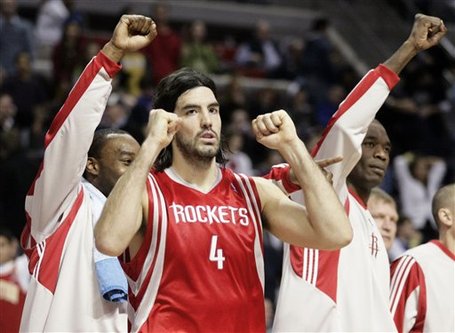 Von Wafer -- Only ten points off the bench.  Cut his ass.

Zone Defense -- On a more serious note, while a zone may be necessary for a bit, it needs to be a really quick fix.  We gave up 105 points to a team that only averages 93 per game.  Which means that unless we figure out how to make up for our size deficit (um...Mutombo) and get out of this zone, it could get worse.

Kwame Brown: 5 minutes played.  And the point of starting him was...?

Cheerleader of the Night:

Dikembe Mutombo was going nuts on the bench as always.  He even reversed a call by yelling at the refs.  And let's be honest, who can ignore Master Deke?

Quote of the Night:  Tracy McGrady

"I didn't get tired, which surprised me," said McGrady. "I played 37 minutes and still felt good."

Self-Esteem Booster of the Night:

We played well enough for me to wait all the way until the end of the recap to mention Yao Ming's name.  By the way, he didn't play.