With Injuries There Can Be No Blame

Share All sharing options for: With Injuries There Can Be No Blame 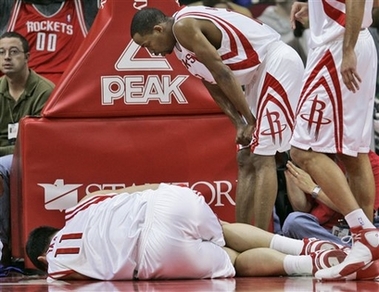 Beginning in youth ball, athletes are taught one thing: play hard until you've got nothing left.  The idea is jammed into players' minds with the threat of suicide lines, push-ups, and other harsh physical punishments.  Once the idea of balls-to-the-wall effort is embedded, coaches don't want players to ever think otherwise.  Especially if they play sports for a living.

From game to game, despite complaints that refute this, the Houston Rockets play with hustle and determination.  They dive for loose balls, sprint up and down the court on fast breaks, and push and shove and fight for position underneath the basket.  Coaches, front office members, and fans alike can't ask for much more.  People will say that Tracy McGrady's game lacks intensity and hustle, but often times, he's so banged up that he doesn't even realize how slow he appears to be.  As for NBA teams as a whole, they have short leashes.  One lazy night not only can result in an embarrassing loss, but can also spark criticism from the media and bitching from all those annoying bloggers.  An NBA player has no choice: do your best or else.  But with effort comes risk.  And with risk comes the potential for disaster.

The injury bug eventually lands on every NBA team from year to year, but for some reason, it enjoys returning to Houston.  It even knows who to pick on the most in order to further cloud the team's future.  Tracy McGrady hasn't played a full season in his NBA career.  Neither has Ron Artest.  Yao Ming hasn't since 2004, and chances are he won't ever again.  As fans, it's hard to take all of this in.  So what do we do?  We find someone to blame.

Let's get something out of the way: you can't blame the injured player.  While it seems obvious that the player can't be blamed, I've heard countless whining rants that consist of comments such as "he's injury-prone, so he shouldn't have tried too hard."  I try to ignore those people.  As stated above, it's the player's job to go hard every night, and if that means risking injury on certain plays, then so be it.  Logically speaking, to a degree, players should be able to avoid diving into stands or throwing themselves at defenders if there is no feasible reward.  If you're going to nosedive to save a ball, but the best you can do is throw it to the opponent or  to somewhere else in the crowd, there is no point in doing so.  Players know this when they watch the film, but they don't always realize it during the game.  Their instinct, their attachment to the idea of all-out hustle, prevents them from slowing down sometimes.  As for injury-prone players, the reality is that while the Rockets need Yao Ming to play hard, there is always a chance he could injure his large frame when he does up the effort.  It's a risk we took when we drafted him.  But players, Yao included, can't be blamed for doing their job. 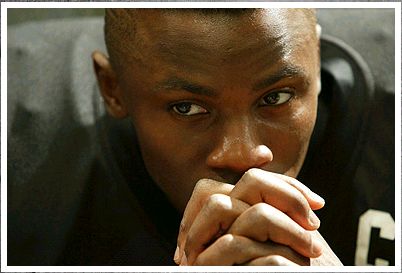 So who else is there to blame?  Rick Adelman?  Hardly.  What can he possibly do to prevent a freak injury?  It's not like any of these injured stars went down in Boobie Miles fashion, in the 4th quarter of a blowout win.  The Rockets were barely ahead of the Thunder went Artest's ankle gave out.  Yao said he and Battier bumped knees on the very first play of the Indiana game.  It's not Rick's fault any of this happened.

How about the King of Blame himself, Rafer Alston?  Before Rafer's arrival in 2005, Yao Ming had played 80+ games for three years in a row.  Tracy McGrady had just played 78 games, his second highest season-total of his career.  But since Rafer has come to Houston, Yao has yet to reach the 60 game plateau, and Tracy has played 70 games only once.  Is this a coincidence?  Yes.  But it gives us more reasons to hate on Rafer, which is fine by me.

Why not blame GM Daryl Morey?  Morey brought in Ron Artest, an injury-prone star, with the hope that he could carry the Rockets if Morey's other two injury-prone stars hit the pine.  But now all three are down.  Is this simply a case of karma for Morey's ignorance to Murphy's Law?  Could he have found another player with a healthier resume to bring in, as opposed to Artest?  After all, he did tell Jonathan Feigen the following:

"I expected we’d have ups and downs with injuries; I think that’s our history."

Or, in the support of the mathematician, is it possible that we just got really unlucky?  I vote for the latter.  Morey had every reason to accept Sacramento's trade offer.  In Morey's brilliant mind, the potential dividends that Ron Artest could bring us outweighed the potential disasterous effects, health-related or jail-related.  And despite figuring that injuries would strike yet again, Morey had this to say:

"Hopefully we get through it in a positive way and be healthy and playing well at the end. I think we still have a chance to accomplish that... At the end of the day, that’s how everybody is judged, by how we do in the post-season.  It doesn’t matter if I think that’s how it should be; it is. "I’m OK with that."

The Artest experiment is still in it's early stages.  So, as much as a fan could want put the blame on Morey, it cannot be done.  It's simply unlucky, and as Morey said, just because we have our best talent in suits right now, it doesn't mean that we're done for good.

I think I've made my point clear: there is nobody we can blame.  Injuries happen, and with the mindset that players have to give it their all, without a little luck, injuries are difficult to avoid.  And as injuries pile up, frustration sets in.  However, despite our growing injury history, I think Houston can compete with any team in the NBA, if healthy, at the end.

Editor's Note: Jesus, I'm so sick of saying if healthy, then X will happen.  That and Houston, we have a problem.  Can that just die already? 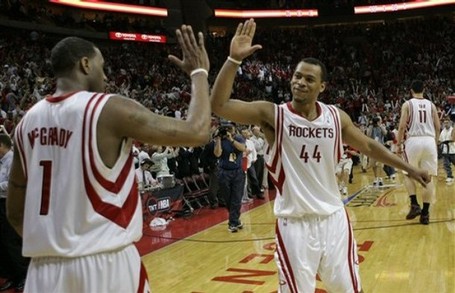 Not to end on a sour note, but my only question for our team is this:  How will our collective morale respond to this Battle of London-esque bombing that we are taking to our roster?  Not only will we be thin on the court at times, but with Yao, Tracy, and Ron constantly questionable for games, will our locker-room chemistry be shaken?  Will our confidence erode?  After all, if a player doesn't believe that his teammate will be able to finish out a game, much less be effective, than how can he trust him with the ball, especially in crunch time?  This is the biggest obstacle that the Rockets have to overcome: the destruction of morale.  We must, for a third consecutive year, prove to the rest of The Association that we can overcome injuries, both on the court and in our heads.  Though we may be tired of playing undermanned, we are, if anything, battle-tested in the area.  We can't be weary of the plague of uncertainty hovering over our season.  Instead, we must continue to be strong and have faith in our teammates that are indeed playing.  If we manage to do that, then all of these injuries will be an afterthought come playoff time.