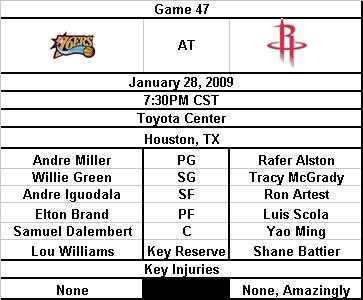 Point Guard
Alston - Oh crap, the word out of the locker room after the Knicks game is showing that Alston may be the team leader. This scares me quite a bit.
vs.
Miller - A good player who has constantly been on bad teams. I think part of that is his attitude though. I don't have much insight into him but from what I've seen he's a bit of a baby.
Edge: 76ers, but not by that much right now

Shooting Guard
McGrady - Well, on the plus side, he did get in the lane 9 times against the Knicks, of course the Rockets had about a thousand possessions too...
vs.
Green - Can he make Tracy shoot jumpers like everyone else? Does he even have to try?
Edge: Rockets

Small Forward
Artest - So first he could be out till the All Star Break, then he could be out a few days, and now he's playing. My guess is that his agent is telling him he's dumb not to play if he's looking for the most money possible. Either way, Ron will take off this year, I absolutely guarantee it.
vs.
Iguodala - The Brand/Iguodala mix was supposed to be huge this year, but because of Brand's injury it hasn't had a chance to materialize. Personally I think it's a terrible combo, and maybe that's why Brand could be on the trading block.
Edge: Even

Power Forward
Scola - I feel bad for Luis, he missed that layup near the end that could have kept the Rockets in the game and he's the kind of guy that stuff like that wears on. Wait, did I say I feel bad for him? I mean I feel bad for the 76ers
vs.
Brand - What's there to say? He's back for his third game from injury. He's always been a second banana kind of guy, but he's getting first guy money.
Edge: Rockets - With Brand still coming back from injury, Scola will take advantage with his hustle.

Center
Yao - Yao doesn't like losing. He doesn't like not being able to control whether the team loses or not. He's going to destroy the 76ers tonight.
vs.
Dalembert - Good young player, just on the wrong end of it tonight
Edge: Rockets

Injuries
Houston Rockets
OUT - None??? Is that really possible?

My Prediction: All three of the big guys are back tonight if the Rockets are to believed. I think that will spell a win, they'll all want it very badly. Rockets by 9