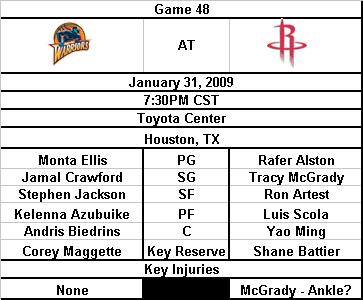 Point Guard
Alston - Under no circumstances should he shoot the same amount of times as Yao, that's just unthinkable. Find the extra man, you weren't that wide open. I was really hoping to see more after his outburst in New York. Maybe tonight is the game that it kicks in.
vs.
Ellis - He's only been back a few games from his injury/suspension so it's hard to tell, but he did not look like the guy Golden State put all their money into last night. He's shooting terribly though, so it's probably just conditioning and rhythm that he needs to get back.
Edge: I really don't know if Ellis or Crawford is playing PG, but either way: Warriors

Shooting Guard
McGrady - Tracy is nursing an ankle injury after not getting out of Yao's way going back upcourt. I think he'll be fine and play. My only concern is that him hobbling a bit on one ankle could hurt his knee by favoring the ankle.
vs.
Crawford - He's a good player, but far from great. I wouldn't want him kicked off my team, but I certainly wouldn't want to have to rely on him.
Edge: Rockets - If McGrady can't go and Shane Battier plays SG it is still Rockets

Small Forward
Artest - This is the greatest
vs.
Jackson - matchup of awesome "hot heads"
Edge: this season - Even

Power Forward
Scola - Averaging 20 and 9 over the last five, with 62% shooting. If you want to know where the problem is, look elsewhere.
vs.
Azubuike - A good player, though would be the Rockets third string power forward. That's not a knock, but it is the truth.
Edge: Rockets

Center
Yao - He'll be on fire in this game. Fronting him does not work anymore and that's the only defense the Warriors have for him.
vs.
Biedrins - My gut feeling is always that this guy isn't very good. But he hustles and seems to get his points and rebounds.
Edge: Rockets

Game Time Decision - McGrady, and if Artest can play on partially torn ankle tendons, he better suck it up
OUT - None

Golden State Warriors
OUT - None

My Prediction:Tom and I will be there live, but come on, it's the Warriors. They only beat the Hornets last night because only Chris Paul showed up and shot 50% and the team still shot 35% from the field. Rockets get up big and find a way to hold it big.