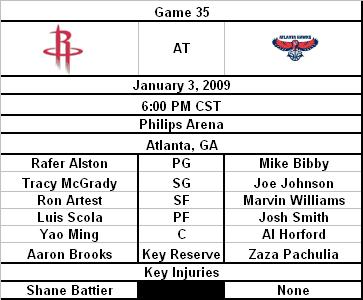 Point Guard
Alston - Please stop sucking completely in every way, please
vs.
Bibby - Will probably have his way with Rafer tonight
Edge: Hawks
Shooting Guard
McGrady - I know he's not actually playing, mostly because he's 29 and broken down. A horse would have been put to sleep by now. But I had to vent so I put him here. You are a complete baby Tracy McGrady. I want to write an entire post about what a waste of space you are on the court right now but can't make myself do it because I want you to be good so badly. You make 21 million freaking dollars a year and yet you are a quitter, a whiner and basically a little bitch. You don't like the effort of other players? Say something, don't join them. You don't like not getting the ball? How about you do something other than standing 7 feet outside the 3 point line. You are pathetic, right now I have absolutely no respect for you. 21 million dollars? Seriously? You owe it to my kid that watches the game with me to play like a man. I don't care if you don't want to be a role model, for 21 million dollars that's the job you have.
vs.
Johnson - Better by about 80% than Tracy McGrady right now with only 80% of his talent
Edge: Hawks
Small Forward
Artest - I'm begging you Ron, go Crazy Pills. Yell at every single player not named Yao on the team. Go nuts. Get a tech. Hell get kicked out of the game because the refs keep letting other teams kill you.
vs.
Williams - He's not that good
Edge: Rockets
Power Forward
Scola - One of the few players playing hard still. Unfortuantely no one gets him the ball when he's hot, and no one takes advantage of him being the only player on the team willing to rebound all game.
vs.
Smith - Insane athlete, not insane basketball knowledge
Edge: Rockets
Center
Yao - Dunk on someone, please big man. Get angry, you were getting some primo position and then as you got hit more and more stopped working as hard for it. Still, you work harder than anyone else on the team, so it's hard to get on you.
vs.
Horford - His actual skill is really good, but his motor is better. That's a good combo
Edge: Rockets
Key Reserve
Brooks - START SHOOTING AGAIN AARON. Stop letting a few missed shots get into your head. Unlike Tracy McGrady you are actually a good shooter
vs.
Pachulia - Please piss Yao off tonight. Pretty please?
Edge: Rockets
Injuries
Houston Rockets
OUT - Shane Battier, rest up sir, we are going to need you down the stretch