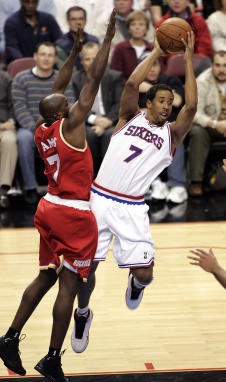 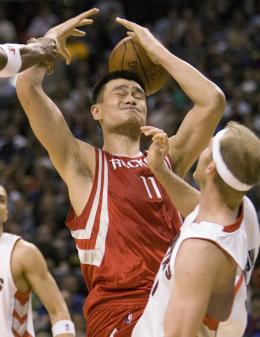 There's no way around it: last night's performance was terrible.  We were waving white flags the minute we stepped onto the court.  We were soft.  Aside from Von Wafer, who I will get to later, there wasn't any effort, any intensity, or any focus on trying to win.  It was baffling to see a team that talented, a team supposedly "on the ropes" after ugly games against Milwaukee and Washington, play against a struggling team like Toronto and get their asses kicked.  It was simply embarrassing.

Now hold up just a second.  Hasn't this happened before?  Couldn't this quote from Jonathan Feigen be used to describe last night's game?

The offense was stagnant again, but that's nothing new. The defense did not exist, but that has become an increasingly common problem.  There was no intensity, no focus, no professionalism.  This time, when the Rockets struggled, they also surrendered

Perfect.  But that's not what Feigen wrote to describe last night's game.  Jump to see what he actually wrote:

The Rockets had finally achieved something. They had gained admirable balance.

They were as useless defensively as offensively.  In a game in which they seemed determined only to surrender, the Rockets ran their offense with a combination of cluelessness and carelessness.

The two quotes sound about the same, correct?  It's precisely my point: the first quote came from the ugly Philadelphia loss last season, and the second came from last night's debacle.  So, to state the obvious, we've been there before.

Think about it.  In the loss to the Sixers last year, a year after beating them by 50 in our previous visit to Philly, we were down at one point by 31 points.  Yao called us "soft", McGrady said we "didn't play hard", and Bill Worrell took a huge shot at us, calling it the worst game he'd ever seen the Rockets play.  Was last night any different?

It would be nice if we could just instantly turn things around, but when games like this take place, there is usually a brief period of construction, aka "trying to work the kinks out", before anything good starts to re-emerge.  It happened last year, seeing as we lost 4 out of our next 6 games following the Philly game.  But, after figuring out what went wrong and what needed to change, we came around and went on a small winning streak before piling up the 22 wins in a row that turned around our season dramatically.

What I'm saying is that it may take a little while for us to get back in sync, back in rhythm.  We can't all of a sudden expect another huge winning streak to unfold as a result of this bad play of late - winning streaks such as last season's seldom take place.  But I think we can use this game to motivate ourselves and hopefully find some chemistry.  Even if we're not winning every game, if we show up to each one and play with effort, intensity, intangibles, and heart, everything that was absent above the border, I'd be satisfied.  Anything to bring this sinking ship afloat.

Von Wafer came into the game with 12 minutes left and scored 18 points, therefore saving us from even more humiliation.  The same happened in the Philadelphia game last season - the subs came in and scored the majority of our points, bringing us back from 31 points down and keeping the final score from looking even more sickening.  So to the inevitable question:

Does Wafer start over McGrady?  No, of course not.  Does he start over Luther Head?  Absolutely.

Adelman should reward Von for last night's solid effort among the other weak efforts.  It shouldn't take much for him to replace Head in the starting lineup.  Maybe Von can use this game as a building-block and give us some more production, as opposed to the various DNP-CD's that he has piled up of late.

But after all of this, if there is nothing else you can take from this game on the positive end, remember: it's happened before.  You can say that certain circumstances were different, but let's be honest - these two games are comparable.