Share All sharing options for: McGrady the All-Star Starter?  Hardly. 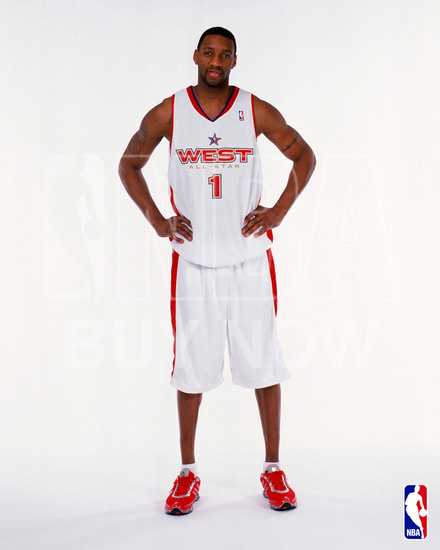 Thought I'd throw in my two cents on #1 before "Bash T-Mac Week" comes to an end.  It's on a more general note: the 2009 NBA All-Star game.  If the polls ended today, your very own Tracy McGrady would be starting for the Western Conference squad.  Even as a Rockets fan (or, better yet, especially as a Rockets fan), it's a travesty.  As of January 2nd, the polls read as follows:

I'll let the Rafer thing speak for itself, but the fact that Tracy McGrady has more votes than both Chris Paul and Brandon Roy is ridiculous.  While Roy's snubbing may not be much of a surprise given the lack of media attention he receives outside of Oregon, the fact that Chris Paul, the MVP-runner up last season, isn't even that close to McGrady is astounding.  Does anyone watch T-Mac play anymore?

I've heard of fans siding with the stars of yesterday.  It happens in every sport - the most popular players get votes over the young rising stars who put up better numbers.  But this is more than that.  This is a beyond-obvious blunder by the fans.  It's like if Maxim were to give their "Sexiest Woman" title to Cloris Leachman.

Since when has T-Mac lived up to his title as a "star" in the NBA, at least so far this season?  He hasn't put up good numbers at all, his team still hasn't gone to the second round of the playoffs, he's missed a handful of games, and the last time he did anything exciting, aka dunk the ball with any ounce of authority or athleticism, was during the New Orleans game last season, a simple dunk that has been severely overplayed on the Rockets' scoreboard before every home game.  Probably 'cause that they really don't have much else to show.  It's been a while since 13 in 35. 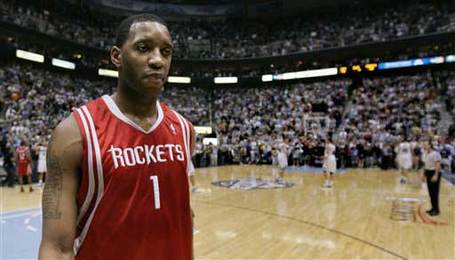 Can you think of the last time you saw Tracy on SportsCenter's Top Ten Plays, or on NBA.com's Top Ten Plays?  I can't - once again, it's been a while.  The only reasons that he has received any media attention lately have been A) His failure to produce, or B) The 22-game winning streak, something that garnered more national respect for the Rockets as a whole than for Tracy McGrady.  So what is inspiring all of these fans to suddenly vote for T-Mac over Chris Paul?  In this case, it's probably due to Chinese voters.  Can we do anything about that?  Nope, except vote like crazy for Chris.  If Dwight Howard can overcome the Yaopalooza in China, then maybe CP3 can as well.  But it probably won't happen.

Despite what I said earlier, other sports' All-Star games are indeed beginning to see some improved knowledge of their voters, specifically football.  Terrell Owens got passed over for Anquan Boldin and Larry Fitzgerald this season, two receivers that have consistently put up TO-like numbers every year but never got much respect.  Running backs Thomas Jones and Chris Johnson were chosen over guys like LT and Willie Parker.  Cornerback Nnamdi Asomugha made it over fan-favorite Champ Bailey.  Why doesn't this happen in basketball?

Maybe fantasy football is more popular than fantasy basketball, therefore inspiring stat geeks to vote for players that had legitimate Pro Bowl seasons.  But whatever the case, it's wrong, and something needs to change.  Like, for instance, Tracy needs to sit out.  Hopefully for health reasons, but if not, for moral reasons.

Let me make this clear: even if he is voted a starter, he'll probably sit out due to health concerns.  But what if he was healthy enough to play?  Should someone who has played this poorly so far this season accept the title that he has been given?  It would be unprecedented for Tracy to say, "Hey Chris, start over me.  You deserve it."  But what if he did it?  It would certainly improve his image, if nothing else.  But I'll keep that possibility short and sweet, because it ain't happening.