State of the Union: Crazy Pills as a Rocket

Share All sharing options for: State of the Union: Crazy Pills as a Rocket

We are now 35 games into the Ron Artest experiment. The Rockets being a .600 team, right at 21-14. Which is better than last year, but not nearly what was predicted or expected from this team.

(Yeah, I had us at 25-10 in my season predictions for this point... of course I also expected the team to go undefeated in February. Right now I am starting to doubt that possibility.)

But now is as good of a time as any to discuss the results of adding one Ron "Crazy Pills" Artest to the Rockets lineup and locker room. For those that have been in hibernation since August, or are simply Lakers fans, yes, Ron Artest was traded to the Rockets. And so far here are his statistical contributions to the team:

First, a disclaimer: We all know that Ron Artest cannot and will not be judged on statistics alone. I am going to judge him on three "elements": (1) wins/losses, (2) energy on the court, and (3) his presence in the locker room. That said, yeah, I am disappointed that Ron Ron is shooting a career-worst 37% from the field. I'm also disappointed that he's mimicking T-Mac and is shooting a wholly unnecessary 5.3 three-pointers a game (making 40%, but still). On the flip side, his points, rebounds and assists are right in line with what could be expected... they just have not come in the way I expected back in August. The injury to Battier didn't help. Nor does the fact that Artest is playing through his own severe ankle injury.

But can we consider the Artest trade to be a successful one yet?

There is of course a reason why I am willing to say this. The Rockets have been struggling mightily lately. Losing games to bad teams (Indiana, Washington, the Clippers, etc.) while also showing up with no energy in important games (@ Toronto, v. Washington at home, v. Milwaukee at home, etc.). Rafer Alston has been quoted as saying that the team is not on the same page. Yao has expressed frustration in the team's day-to-day effort. Tracy McGrady continues to be a whiny little bitch. The Rockets are mediocre and have been uninspiring for the last 4-6 weeks.

Yet here's Ron Artest proving his value to the team. Today he sums things up perfectly and beautifully (in Feigen's article in the Chronicle):

"It’s going to come down to Mac getting healthy, and then Mac’s got to kind of be more of a dog," Artest said. "Yao is definitely doing his part."

"I think it’s coming along. For some reason, we’re not able to put a good game together. I think right now we look better on paper than what it really is. You see the Big Three people talk about; it’s not turning into wins that people would think it would. We have to get more out of ourselves. Sometimes we play like our life is not on the line. Once we put our life on the line every game, we’ll be OK."

In one simple sound-bite, Artest is both a calming influence and a motivational "light a fire under someone's [McGrady's] ass" presence. You can say what you want about Artest being a weird guy, or crazy, or unpredictable. What you cannot say is that he doesn't "play like [his] life is on the line" in nearly every game. Artest is the only player in the entire locker room not named "Yao Ming" who has the temerity (and ability) to call out Tracy McGrady and get away with it. Yao just won't do it, which is why the Rockets need Artest.

Compare for a moment...

McGrady is hurt. This is nothing new. So McGrady is going to sit out every other game or something like that. And in the games he does play, he's had a tendency to do nothing but stand outside the three point line and pass the ball to guys like Luther Head. Yeah, that's really inspiring stuff, Tracy.

Ron Artest is also hurt. But he's Crazy Pills and McGrady is not. So Artest plays. Why? Because he feels compelled to. And when Artest plays, does he stand around and do nothing? No. He makes sure his presence is felt. Go back and watch the fourth Q and both overtimes in the Utah game. Ron Ron was simply NOT going to let the Rockets lose that game. Mind over injury. Or something like that. 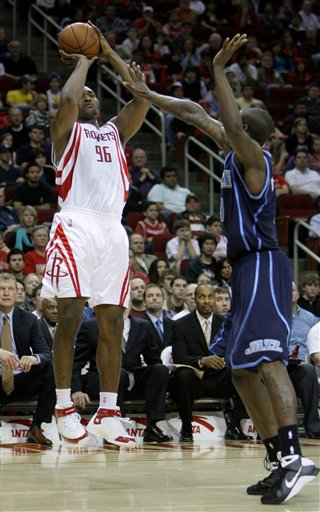 This is where the statistical stuff can get confusing. Yes, Artest's stats are "down" compared to his career marks, and yet he still finds ways to impact the game. McGrady had a triple-double recently, and yet it had little to no impact on the outcome of the game. Yao goes for 20 and 10 basically every night (he's a machine like that), and sometimes it's huge for us... and sometimes I wake up the next day and wonder where the 20 points/10 rebounds came from. I rarely say "wow, Artest is quiet tonight." So, element (2) of my evaluation (enegy on the court) says Crazy Pills has been beneficial to the Rockets on the court.

The Rockets are also a handful of games better than last year's pace... even though the team has been hurt, sluggish and cover-your-eyes awful at times. With Artest being the only real "new" piece to the puzzle, he's gotta get some of the credit for this, right? So, element (1) (wins/losses) is also in Artest's favor as being beneficial to the team.

And after calling out McGrady while also indicating that the team will be fine (in spite of Alston's recent proclaimations to the contrary)....... Artest has been anything but a cancer in the locker room. He's been a Tru Warier, a beacon of strength and intestinal fortitude. And a guy that refuses to quit. And will not let others *cough*T-Mac*cough* quit on him or his team. Element (3) therefore is a plus, too.

This is why I love what Ron Artest brings to the Rockets. He's the anti-McGrady.

Now, does Artest have flaws? Yeah, he's been prone to being a blackhole on offense. The ball movement has a tendency to stop when he catches it. I have faith that this will change soon. Artest also hasn't been his typical lock-down defensive self. But that may change when his ankle is closer to 100%. And I've already mentioned how Ron Ron shoots WAY too many 3s for a guy who should do more damage near the basket. But these are flaws I can handle/accept. Because I have no doubt Artest will continue to play hard every night. You can tell the game *matters* to him.

So - do I have any regrets about the Artest trade now that I've seen him play for a couple months in Houston? Oh... hell no! (Translation: re-sign Crazy Pills, Mr. Morey!!)