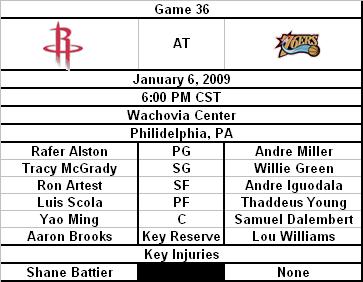 Point Guard
Alston - Rafer played a solid game in Atlanta, yet still was a key component in the Rockets losing in the end. That says all you need to know
vs.
Miller - Eats players like Rafer for breakfast, can't really hang with guys above him.
Edge: 76ers

Shooting Guard
McGrady - No idea if he is going to play tonight or play in Boston. No word yet. If he doesn't go, and Von Wafer doesn't start, someone may need to call the police on me.
vs.
Green - Really Philly? Willie Green? Really?
Edge: Rockets

Small Forward
Artest - The jury is still out as to whether he will play tonight. I'm hoping he sits, but think he'll play.
vs.
Iguodala - Not worth the money he's paid, but we have a certain player like that too. I think he's a very good/great second banana, and maybe that is the plan with Elton Brand when he's not injured, but is Brand really a one himself?
Edge: Even

Power Forward
Scola - Just keep doing what you are doing
vs.
Young - He's better, sooner than I expected him to be. He has the talent of an all star in the games I've seen him play, but is still a few years off from contending for that spot.
Edge: Rockets

Center
Yao - While his rebounding has creeped up, Yao's scoring has come down. I look for him to break out tonight
vs.
Dalembert - He always seems to give Yao trouble. Here's hoping Yao takes that personally
Edge: Rockets

Key Reserve
Brooks - Mighty might needs to get back into the flow of the offense. His play creation is what made him/the second team so good early on.
vs.
Williams - Who is Lou Williams?
Edge: Rockets

Injuries
Houston Rockets
OUT - Shane Battier, I hate seeing you out, but I know you need it

Philidelphia 76ers
None - Okay, that's not true, Elton Brand is out for the game. Clearly that is a huge injury