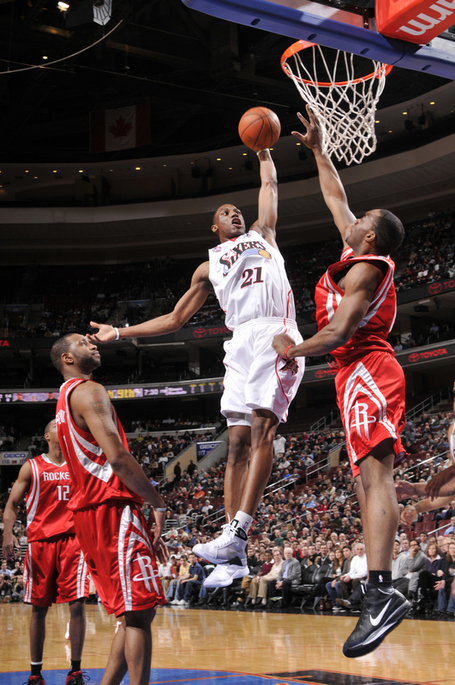 Summary: I was expecting some effort, intensity, and grit out of this Rockets team.  It was sort of there in the first half.  But when the second half began, we lost it.  Unfortunately, we didn't recover until about midway through the fourth quarter.  We were out-hustled in the paint and on the break.  During the third quarter, we acted as if we were entitled to win this game based off our first half performance, and when that wasn't working, it was too late to start hustling.

Yeah, I realized a few things going in.  We didn't have Artest and Battier, among other things such as: 1. The Sixers can grab offensive rebounds, 2. The Rockets haven't been great on defense lately, 3. Aaron Brooks has been in a slump, 4. Yao Ming hasn't played well against Phily historically.  I had those thoughts in mind coming into this game, so I wasn't surprised to see all four pan out against our fortunes.  What surprised me was that every one of those stats panned out enormously in the Sixers favor.  Observe:

The only excuse I can think of is that either Battier or Artest would have definitely decreased Andre Iguodala's production.  Von Wafer, as good of an offensive game as he had, looked pretty lost at times on the defensive side of the ball.  We didn't play too badly in the first half or fourth quarter, but our third quarter killed us.  We needed to get a win tonight going into the Boston game, and it doesn't help that the C's just lost to Charlotte.  They'll be ready to play.

Tracy McGrady -- I asked Tracy to do one thing as long as he played: try hard.  And despite the fact that he didn't have his best shooting game, he had nine assists and ran hard up and down the court.  He also had 3 steals, so at least we are seeing some form of improvement.  But he looks like quite the elder statesman out there with that knee injury.  My mother looks more comfortable running.

Von Wafer -- It's not his fault that he didn't get many second half minutes after shooting 6-7 from the field.  I can understand him not being in due to his defensive struggles, but it's tough to just bench someone who is that hot from the field.

Yao Ming -- 14 points and 6 boards: doesn't sound like a terrible night, but Yao gave up three billion points in the paint.  I shouldn't have to search for a 7'6 guy on my TV screen after a Sixer makes a wide-open lay up.

Aaron Brooks -- It's just not there right now.  He'll get out of it, but right now, he's just in a slump.  There's no other way to put it.

Word of the Night:

"The Dropsies."  Invented by Bill Worrell, "The Dropsies" is a disease that Yao Ming has contracted that causes him to repeatedly drop the ball.  As soon as the first quarter was coming to an end, Worrell boldly stated, "Yao has a case of The Dropsies again tonight."

Nickname Request of the Night:

Can we call Von Wafer "Hawk" from now on?  He's fierce like a hawk, and he just got that mohawk.  Maybe?

Personal Concession of the Night:

Mareese Speights is the real deal.  He's got a nice jump shot, he's lengthy, and he can finish inside.  He's their future in the paint.  And speaking of paint, the Sixers put on a dunk show tonight.  Even when they missed the dunks, it was still impressive to see Thaddeus Young and AI get off the floor.

Next Game: At Boston.  Tony Allen is out, so watch out for Brian Scalabrine!