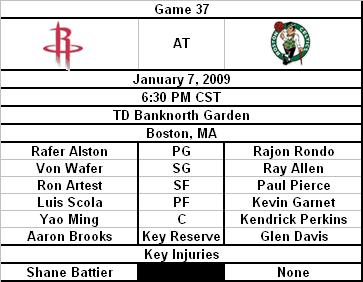 Point Guard
Alston - This year Rafer is at "career as a Rocket " lows pretty much across the board. So the guy we thought was bad is somehow worse. Seriously, anyone have something stronger than Advil?
vs.
Rondo - Who wants to bet that he will mind screw Rafer again?
Edge: Celtics

Shooting Guard
Wafer - Yet again Rick decides to take our best offensive option in a game out when needed. Fantastic work sir.
vs.
Allen - He's got old balls! Okay, yes I'm mailing this in, but come on, the Rockets can't seem to beat anyone right now.
Edge: Celtics

Small Forward
Artest - Please be back? Please?????
vs.
Pierce - This is the man that outplayed Kobe Bryant in the cahmpionship series. What will he do tonight?
Edge: Celtics

Power Forward
Scola - The only player not named Landry or Wafer giving all out effort. His play has been fantastic. It's sad that no one will feed off of him.
vs.
Garnet - I wonder if he'll d up Rafer tonight? I might pay to see that
Edge: Celtics

Center
Yao - His defensive intensity is gone. It's the reason the Rockets really aren't winning right now. And this is the first negative thing I've said in my entire life about Yao. We need him to get back to dominating both ends or the Rockets have no chance.
vs.
Perkins - Getting better and better by the minute it seems
Edge: Rockets

Injuries
Houston Rockets
OUT - Shane Battier, rest up sir, we are going to need you down the stretch

My Prediction: Rockets win by 8. I think it's time to start bringing these predicitions back. It's the only way out of this rut I think.