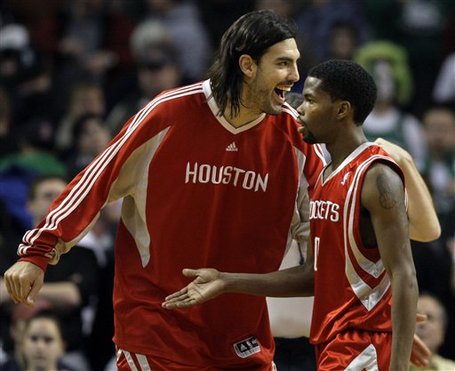 Let me get this straight.  Coming into the game, the Rockets...

And after all of that, we won?  This requires some sort of celebration... 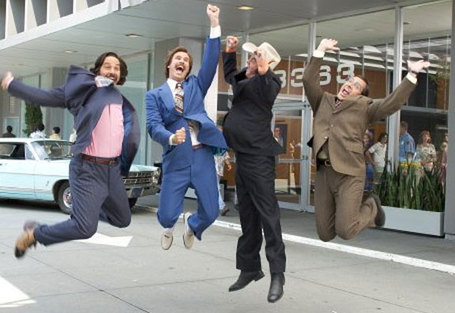 But in all seriousness, this was a great win for the Rockets, one that not many of us expected to happen.  Okay, so maybe I came within two points of  correctly predicting the score of the game, but if you look below that, I gave an honest prediction that involved us losing.  It simply couldn't happen, not with how we were playing.  But maybe we failed to look at the other side of things.  Boston has been dreadful lately, and maybe they were out of sync enough to...well...screw it.  We played like champs tonight.

Aaron Brooks -- Oh man, this was great to see.  Brooks logged 37 of his best minutes of the season, going 8-16 for 19 points, 3 rebounds, and 4 assists.  He also helped hold Rajon Rondo to five points.  The offense just looked so much better under Aaron, especially in the first half.  He was flying everywhere, getting in the lane, and just creating more opportunities.  And boy was he clutch in that fourth quarter.  Helluva game, Oregon Man.

Yao Ming -- The Great Wall actually played some good defense tonight and kept people out of the paint.  Oh, and he also went 10-13 for 26 points, 8 rebounds, 2 blocked shots, and get this: No blocked attempts!

Von Wafer -- This could have gone to Artest, but I'm giving Hawk the honors instead.  How deadly is this guy?  How could five teams pass on him?  This continues to puzzle me, but makes me happy at the same time.  Anyway, Hawk went 4-6 from three, had 12 points, and better yet, ZERO turnovers.  And of course, that go-ahead 3 with 44 seconds left.

Ray Allen: 4-13.  He uncharacteristically missed a lot of open shots.

"Yeah, if you've ever been in one of those Academy Sports and Outdoors...that's like a wonderland in there."

Classy Broadcasters of the Night:

I'll let Bill and Bulls' quotes speak for themselves.

Bill: "That's what Scalabrine does best."

Bullard: "What, knock his own teeth out?"

Bill: [after a Perkins air-ball] "Woah, did that hit a low-flying aircraft?"

Playbook Observation of the Night:

In the second quarter, we gave Ron Artest the ball twice out on the wing, and put him in isolation.  Normally, at this point, we then hit the showers and find out if Ron scored or not once we reach the other end of the floor.  BUT, on two back-to-back plays, we did something Adelman-like.  We cut to the basket off-ball.  First it was Carl Landry.  He went straight down the middle, Artest fed him the ball, and we got a three-point play.  Very next possession: Artest gets it on the wing, draws attention, and The Chuckwagon cuts down the middle.  Ron hits him with a pass (not literally, Chuck actually caught this one), and he makes the easy reverse layup.  As I have said many times, more off-ball movement on our isolation plays will open up the offense a lot more than just getting out of the way.

Non-Statistical Hero of the Night:

Carl Landry was a warrior inside, and while he only went 6/6, it was a very hard-fought 6/6, and I think his energy spread to everyone else on the floor.

Next Game: Friday @ OKC Thunder.  Let's win the easy ones now, too.