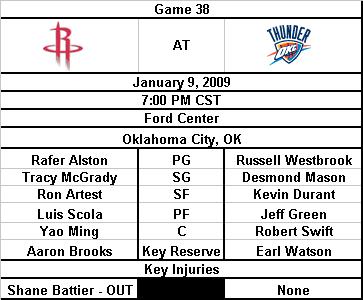 Point Guard
Alston - Rafer hasn't shot over 50% since the Cleveland game. His FG% is down to 35.5 percent. Ugh. I'm too pissed at him to give him the edge here.
vs.
Westbrook - He started off poorly, but of late, Westbrook has upped his FG% from 35 percent to 41 percent, has reeled off a few 30 point games, and is averaging 4 rebounds to go with 5 assists. I'm not convinced he's a point guard yet, but I am convinced that he's got loads of talent.
Edge: Thunder

Shooting Guard
McGrady - I want to see our offense click like it did last night with McGrady in the lineup. Even if we only scored 89 points last night, the Celtics boast some great defense, and we were very efficient at times during the game. Hopefully we can stay in sync with Mac's return.
vs.
Mason - Desmond is a high flying dunker...and that's it. So is James White, and unfortunately for NBA highlight reels everywhere, he's no longer in the NBA. Desmond's not much better.
Edge: Rockets
Small Forward
Artest - Great game from Rawn last night, but he can't turn off the jets tonight. We need him to hold down KD, and while I love Ron and think he's a big part of this team, the edge here goes to Mr. Durant. He's improved immensely since last season and is a natural scoring machine.
vs.
Durant - So it's possible that he is a free agent in 2011, right? I can't tell you how incredible it would be to see him in a Rockets uniform. So Mr. Morey, can you please say screw 2010 and go after Durant in 2011??
Edge: Thunder
Power Forward
Scola - Last night was pretty ugly, but he was in foul trouble and Landry/Hayes played their asses off. Still a wild Argentinean beast.
vs.
Green - He's got plenty of good days ahead of him, but he's not there yet. However, if I were a Thunder fan, I'd be excited to have Jeff Green on my team.
Edge: Rockets
Center
Yao - Swiftie probably had Yao's poster on the wall in his bedroom when he was in high school.
vs.
Swift - Living proof that adding 30 tattoos to your body will not make you a better basketball player.
Edge: Rockets Injuries
Houston RocketsOUT - Shane Battier