Share All sharing options for: Recap: Rockets escape attack of the Durants

Because I'm going treat this game like the football team that's trying to get off the next play before someone can ask for a replay...

wow.  That was quite the escape job the Rockets pulled.  Up big at halftime, the Rockets failed to get my "STEP ON THEIR THROAT" memo, so they decided to let the Durants back in the game.  So much so that it was a tie game with a minute left.  Thank God for Luis Scola.  And Thank God Tracy McGrady decided to actually "play" tonight (and not just stand around).

That said:  There isn't much to be proud of from this game.

1.  Scola.  Shutout in the first half (again), Scola comes roaring out of the gate in the second half.  The only person who could stop him?  The referees and/or Coach Sleepy the Dwarf.  The hottest guy on the court in the third quarter gets taken out... only to not see the court again until 5 minutes remain in the 4th?  Yeah, I don't classify that as smart coaching.  It's more like roulette.

2.  Tracy McGrady.  McGrady decided to play tonight.  He looked Tony-the-Tiger GRRRRREEEAT! in the first half... then he started missing.  But he stayed aggressive on offense.  I think I even saw him step in the painted area a couple times!  T-Mac finished with 26 points on 8-20 shooting (damn, his arm is going to be sore tomorrow from all that gunning).  Even more impressive?  He made 9-10 clutch free throws.  Nicely done!

3.  Von Wafer.  Tough D on Kevin Durant at the end when we really need it and would normally rely on Shane or Artest.  Plus, Wafer went a solid 5-10 from the field for 14 points (though he didn't duplicate Wednesday's feat of making four 3s in a game.  It's okay.  Al Bundy never repeated his 4 TD performance, either.) 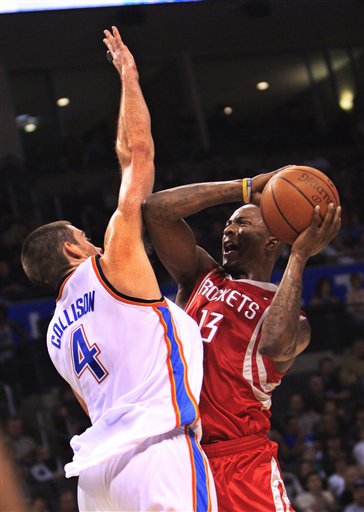 1.  Rafer.  Bill Worrell said Rafer is in a shooting slump.  But don't you have to be moderately good at something before you can be in a "slump" at it?  Rafer finishes 1-7 tonight.  He also turned the ball over TWICE on simple in-bounds plays, once trying to pass to Wafer but instead throwing it right out of bounds.  Only Rafer.

2.  Aaron Brooks' hubris.  Aaron, yeah, you made two 3s in a row.  And they were good, clean open shots.  That doesn't mean you gotta shoot a 3 every time.  You started out 5-7 from the field and then chucked up three straight 3s.  None of them looked pretty.

3.  Yao.  Sorry big fella.  Air Bullard and Worell kept blaming the refs, yet both of your offensive fouls were exactly that.  I defend you to the end when you get hosed by the refs, but moving screens (leading with shoulder) and ducking your head on a post move (leading with your shoulder) will always be called.  Especially since you can't hide at 7'6".  To top it off, you missed two dunks and finished 3-10.  You made Collison and the tattoo freak look competent on D.  That is not acceptable for you.  You're better than that!

In the end, what we have is a 2 point win that should have been a blowout.  And another game tomorrow night.  Rest up boys.  T-Mac and I will be ready to cheer you on from the sidelines.