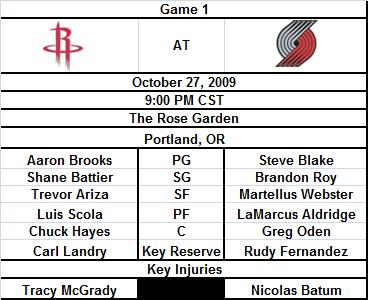 Point Guard
Brooks - Is this the year that ABZ shines? I'm going optimistic here. He was clearly the best point guard on the court in last seasons playoff battle, and even with Andre Miller coming on, I think he can be that tonight as well. Brooks needs to continue his huge leap forward for the Rockets to have any shot at a 41 wins, much less a playoff berth.
vs.
Blake - Count me as a fan of Blake's, however, he clearly has limitations. The Blazers brought in Andre Miller in a move that just might make them the second best team in the West. What is puzzling to me is why Blake isn't starting. I'm assuming it is for the same reason many didn't want Artest to start last year. It gives them some more offense off the bench and much like Manu (he's no Manu that's not what I'm saying) it really only matters who finishes the game.
Edge: Rockets - Andre Miller is going to be the sixth man for the Blazers. I'm interested to see how long that lasts, but this is a match up of starters and the Rockets easily win that. It's debatable if Brooks is better than Andre Miller at this point in their careers.

Shooting Guard
Battier - Since the news of Yao's further demise was brought forth, I spent most of the off season thinking that the Rockets were going to trade Shane Battier. His stock has never been higher and his salary is reasonable. Daryl Morey is looking past this season and to next season and Battier is a huge part of his plan. Battier, much like Scola, doesn't rely on athleticism or speed to do his work so he can likely stay at this level for another 3-4 years and potentially longer. His attention to detail is incredible and there really is only one guy in the league he's had a tough time stopping...
vs.
Roy - And that guy is Brandon Roy. The man Ron Artest said was the best (okay second best) he's ever played against has looked like it when playing the Rockets. He's a special talent that any team would be glad to call their SG. The Blazers, thanks to a new 80MM contract get to do that for 5 more years.
Edge: Blazers - I love Shane, but come on, it's Brandon Roy

Small Forward
Ariza - I don't know my exact words before he was signed, but it was something like "I hope the Rockets don't sign Ariza because he sucks". Hmmm, well, ummm, ya.... To be fair, I was against signing him to a big contract, not signing him to what amounts to an additional MLE. Given the Yao injury exception it really was a nice move. And because the Rockets got that, they didn't have to help out a Western Conference foe by trading Artest for Ariza in a S&T thus not allowing the Lakers additional play room with their own MLE. Savvy move by Morey as always. So, as I said right after the signing I don't dislike Trevor Ariza, I like him a good bit actually, but if anyone thinks he is going to be a star player they have not been paying attention. He will be a great addition to this team next season, and this season it will be about trying to help him bust out of his shell. The better he does this year, the better he will be when Yao comes back.
vs.
Webster - Webster hasn't played in a good while. I'm not going to pretend like I know enough about him to really give an accurate depiction of his game. He's still young and a lot of Blazers fans are still high on him. He was the 6th overall pick in the 2005 draft and is only 22 years old. While I don't agree with the view of Batum that most Blazers fans have, he is a good young player that plays solid, athletic defense. He's going to be missed if Webster can't step up and stay healthy.
Edge: Rockets - This seems pretty easy to me

Power Forward
Scola - Scola is going to be in a battle the first half of the season with Aldridge in more than one way. Their games are going to compete on a national level when it comes to All Star voting. Scola is going to lead the Rockets in scoring, of that I'm pretty confident. His stats are going to look something like 19 and 10 by seasons end.
vs.
Aldridge - I'm not sure how Kevin Pritchard convinced LMA to take 10 million less than Brandon Roy, but it was an absolute stroke of genius. I've wondered aloud for a while how they were going to keep this team together since Roy and LMA were both going to be max players. Somehow he avoided that. That said, Aldridge is clearly a great young power forward who continued to build on his game. He's 24 years old and his game is still growing.
Edge: Blazers - This is a slight edge based on overall production last year. In a one on one match it can move pretty close to even.

Center
Hayes - I'm interested to know if any other team has started a 6'6" center for the majority of their games since the olden days. Hayes plays 4-5 inches above his height, but that still wouldn't make him a 7 footer. He's going to be in foul trouble a lot this year, and it's going to be how he deals with that trouble that will determine if this experiment will work.
vs.
Oden - His offensive game has a chasm to get across before he's worthy of being picked over Kevin Durant. That said he has borderline great defensive skills. The only thing stopping him from getting over that line is his propensity to foul. When he gets that under control, and he will, he's going to be a top 5-8 center in the league easily.
Edge: Blazers - I'd love to say Hayes wins this, but Oden is the better player overall

Injuries/Suspensions
Houston Rockets
OUT - Tracy McGrady - Out for a while. Clearly Yao is out, but I'm not going to put him as an injury from now on as he's not part of the team for this season.
Portland Trailblazers
OUT - Nicolas Batum tore the labrum in his right shoulder and will be out to undergo shoulder surgery


My Prediction: Blazers win this one by 12. I think the Rockets hold tough, but in the home opener for the Blazers this team will be looking for revenge from last year and looking to prove that they are ready to take the next step. I'm not huge on moral victories, but I think I'm going to have be more open to them this year. Any Texas A&M fans out there with some tips on how to do that? If the Rockets keep the score under double digits for the majority of the game it's a step in the direction I want to see.

Blazersedge preview here - And you know what guys, that nursing home comment was pretty accurate. But you better watch out, tonight could be the night grandma actually remembers that recipe for that awesome lasagna