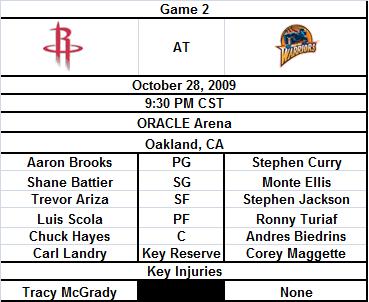 Point Guard
Brooks - Struggled at times last night being the primary option.  This is going to be a long process and it is TBD what the outcome will be.  Tonight he should have a lot of freedom to roam on offense as Golden State isn't exactly known for their defense.
vs.
Curry - I don't understand why he fell to the Warriors, and I don't know why they thought pairing 2 6'3 guards together was a great idea.  That said, the Rockets have had a good amount of success with an even smaller duo at times in Brooks and Lowry.  Curry is going to be a good player, and he is going to score immediately as the PG in the Warriors offense.  Tonight we get to see what he's made of on the NBA level.
Edge: Rockets

Shooting Guard
Battier - He was -22 in +/-.  I don't ever remember seeing a stat like that for Shane.  Clearly it's one game and could just be wrong place, wrong time.  He did hold Brandon Roy under his scoring average from last season, and it's not really his job to bring the offense.
vs.
Ellis - Ellis's shooting percentage feel way off last year in his 25 games, from 53% to 45%.  A lot of that could be explained on rust.  He's had a full off-season conditioning plan to get back to the max player that Golden State is paying him like.
Edge: Warriors

Small Forward
Ariza - Still getting to know Ariza and it is still just as obvious that he doesn't have solid handles and has a tough time creating his own shot.  That's fine, as Ariza wasn't signed for this season, he was signed for the next two.  Hopefully he'll start to settle in to this bigger role and will grow throughout the season.
vs.
Jackson - Port Arthur's Jackson is still a good player. In the off-season he talked about wanting a trade.  Kind of funny when one of your more selfish guys (a guy I really like on the court) is saying that he wants out of a team that allows him to do whatever he wants on the court.  It's a shame, Warriors fans are awesome, they deserve a lot more.
Edge: Warriors

Power Forward
Scola - Hopefully he was just in a funk last night and it wasn't his ankle truly bothering him.  He'll have a match up against a guy that plays with constant energy, so it will go one of two ways.  Either Scola will get Turiaf in foul trouble early and often or it will be a long night.
vs.
Turiaf - Turiaf is a great piece to a championship puzzle, what he isn't is a great piece to a normal every day team.  I really like his game and he clearly brings a lot to the table.  In fact, he does it in a very similar way that Chuck Hayes does it, plain old hard work.
Edge: Rockets

Center
Hayes - Chuck, while obviously offering nothing on the offensive end, did a great job as always on the defensive end.  He should be able to do solid work on Biedrins tonight.
vs.
Biedrins - Easily a top 10 center in the league, and I'm struggling name 5 real centers better than him with Yao out.  Great shooter with a lot of energy.  Should be the perfect fit for the Don Nelson system if Don Nelson was still alive.
Edge: Warriors


My Prediction: Rockets find a way to pull it out, winning by 3.  Even though the Warriors have  a slight edge in the starting lineup, and the more talented 6th man, the Rockets play actual team basketball, something, I wish for Warriors fans,  Don Nelson was capable of teaching anymore.  Sadly he doesn't seem willing to do it.