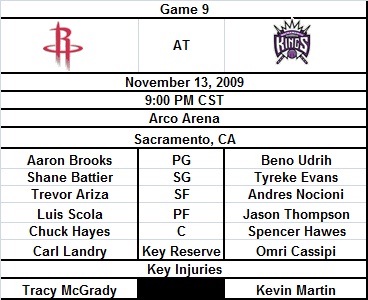 Point Guard
Brooks vs. Udrih - Udrih is a guy that hasn't lived up to Sacramento's plan.  That said, he's not a liability, just a bit overpaid.  He's shooting fantastically this season.  I'm wondering what extended time without Martin is going to do to his game.  Brooks needs to destroy him tonight.
Edge: Rockets

Shooting Guard
Battier vs. Evans - Evans has had a good start to his rookie season.  That will not continue tonight with either Ariza or Battier guarding him.  He has a strong future in the league.  It's interesting how many guys you can say that about on this roster.
Edge: Rockets

Small Forward
Ariza vs. Nocioni - One of the guys I didn't want on the Rockets vs. a guy I dreamed of having.  It might have turned out that I didn't know what I was talking about on this one.  However, Nocioni is a good player that was being completely misused in Chicago.  Ariza has been hit or miss from the field this season, but that was absolutely expected.  He's going to take some time to develop as a number 1, if that's even possible.  I'd be extremely happy if he developed into a great number two.
Edge: Rockets

Power Forward
Scola vs. Thompson - Thompson was considered a reach by many last year for the Kings, he proved that thinking completely wrong.  With Martin out he is going to be relied upon a lot more for scoring, and he's stepped his game up even more lately.  This should be the best match-up of the night.
Edge: Even

Center
Hayes vs. Hawes - Hawes is pretty much the perfect "I need a center that's respectable" guy.  He seems to play hard.  While his game is likely at his peak, it's a level that will give him an extremely long, stable career.  Hayes is at his best matched up against players with Hawes center skill set.
Edge: Even

My Prediction: Tight game throughout.  Both of these teams were underrated coming into the season.  I think the Rockets are the better team, clearly so even, however on the road on the west coast, this will be a fight.  Rockets take an 8 point lead in the 3rd, the Kings whittle it, Rockets build it back up at the end of the 4th.  Rockets by 6