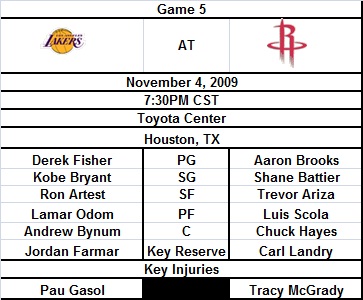 The Match-ups:
Point Guard
Aaron Brooks - Aaron is having a good season, effectively everything Rockets fans were hoping he would be.  Consistently getting 18+ points and 8-ish assists a game.  If he can keep that up, then the sky is the limit for the Rockets.  Those are bordering Chris Paul/Steve Nash numbers.
vs.
Derek Fisher - Sucks, and that's that.  Sorry Laker's fans, I calls em how I sees em
Edge: Rockets
Shooting Guard
Shane Battier - Playing his role as well, or better than he ever has.  And that's really saying something.  The question is, do the Rockets get him to guard Bryant?  Or do they allow Ariza to do it and employ the same tactic they used last time out against Brandon Roy?  Either way it will be interesting to watch
vs.
KobeBryant - He's like good and stuff.
Edge: Lakers - It's Kobe Bryant, still the best player in the world
Small Forward
Trevor Ariza - Playing like a great number one fill in.  He's more than I expected, and has played through his one weakness, ball handling, by being constantly on the move.  Can he keep that up all season?  That's to be determined, but color me impressed for now.
vs.
Ron Artest -
Edge: Rockets - Definitely the newsworthy matchup of the night.  The Rockets won this battle of the off-season, and I can be a man and admit I was wrong about it for this season (I thought the Rockets would win it starting next year)
Power Forward
Luis Scola - Scola has been up and down so far this season, with the passes into the post somehow seeming less available, even without Yao.  He'll adjust to the way the offense is moving though.  You could see it against Utah, he was figuring out the flow.  Lamar Odom isn't going to start playing any defense on him tonight, so you could see a break out game.
vs.
Lamar Odom - Odom has always been a good player, and LA fits his skill set more than any other team could.  He's solid, and can do pretty much everything.  I wouldn't trade Scola for him, and Lakers fans might feel similar about the opposite (that would be a mistake though)
Edge: Even - I think Scola is the better player, because he wants it more, but statistically this is a straight up draw right now
Center
Chuck Hayes - Tonight it will be up to Chuck Hayes to slow a potential seizing Andrew Bynum.  Since post defense is what Hayes excels at, if the Rockets are to win, he'll have to keep Bynum down.
vs.
Andrew Bynum - Stringing together 20-10 games like he's going to finally live up to Lakers fans hype.  Let it be said that no one around here didn't think he could, we all simply stated that until he did it for a season, shut up already.  He's looking like he's going to do that, but let's repeat to ourselves, it's been 4 games and the one center he played (Kaman) he played to an effective stand still.
Edge: Lakers - There you go Lakers fans.  No Yao, you finally win this edge
Injuries/Suspensions
Houston Rockets
OUT - None
Los Angeles Lakers
OUT - Pau Gasol
My Prediction:    Triple OT win for the Lakers