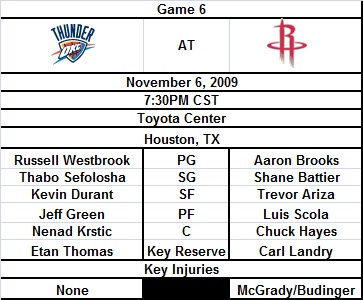 Point Guard
Aaron Brooks - Weak game against Lakers, with an odd propensity to turnover the ball.  That's not Brooks' M.O. so I expect that to be fixed tonight.  The Thunder won't be able to slap at his hands like the Lakers were, just the way it is.  In theory that game should help him focus on the unforced errors he had as well.
vs.
Russell Westbrook - An 8.0 to 5.5 assists to turnover ratio is the only thing keeping Westbrook from being lauded for a great start to the season.  Portland forced 9 TOs from him to only 2 assists and he was 6 TOs to 7 assists against the Lakers.  Westbrook has an infinite amount of potential though and he'll get it turned around.
Edge: Even

Shooting Guard
Shane Battier - He's awesome in every possible way as an NBA player.  Everyone calls him the ultimate glue guy, but he's not only glue, he's duct tape too.  Whatever the Rockets seem to need he figures it out.  Maybe Duct Tape should be his new nickname.  Hmmm
vs.
Thabo Sefolosha - Wish I had something to say.  High draft pick that hasn't panned out to date.  He's still only 25 and he's with the right team to blend in and become a solid role player.
Edge: Rockets

Small Forward
Trevor Ariza - Came back down to earth against his former team.  Some may say he choked, frankly it doesn't bother me at all.  It was one game out of 5 and a few bad decisions less and that game looks different.  Ariza will have a challenge tonight, but his floor movement should allow him to put up points close to his season numbers.
vs.
Kevin Durant - There is no one, not even Bill Simmons with more of an unhealthy man crush on Durant than I.  He's phenomenal (save for three point shooting).  His defense seems to be improving, granted that's based on seeing one game this season so far.  His length and athleticism combined with skill are second to only Lebron James in the NBA and his numbers look eerily similar to Lebron's over his first few years.  Durant is the future of the NBA
Edge: Thunder

Power Forward
Luis Scola - 3 good games with 2 lesser games.  That needs to be more like 10 to 1 for an all star appearance like I predicted pre-season to happen.  I believe he'll get there still, nothing has really shown me that he won't.  He's still figuring out his spot in the lineup with all of the movement, and it's still coming along.
vs.
Jeff Green - Green has stepped his game up all three seasons in the league and he's poised to break out this year.  It will still be a year or 2 before the Thunder can make the playoffs, but it won't be because of Green that they don't, that much is very clear.
Edge: Rockets

Center
Chuck Hayes - Chuck makes 2.14MM, and is putting up 9 and 8 for the Rockets.  That's an absolute steal.  When he's in the game, the Rockets are winning, that's a pretty nice statistic itself
vs.
Nenad Krstic - A great pick up last season for the Thunder.  He's big and only 26 years old.  He makes the MLE amount which is the perfect money for a serviceable center.
Edge: Rockets

Injuries/Suspensions
Houston Rockets
OUT -McGrady, duh.  Chase Budinger is going to be a game time decision.
Oklahoma City Thunder
OUT - None

My Prediction: Rockets struggle with the athleticism of the Thunder for a few quarters.  In the fourth they put the game away, win by 7-11.