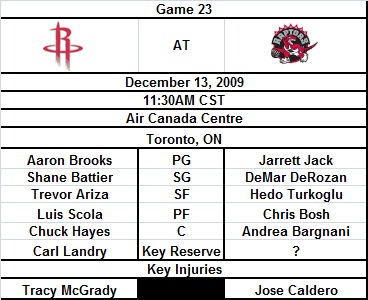 Point Guard
Aaron Brooks - He's like good and stuff.  I wish he would attack the basket with fury every single night, but for a guy his size, not named Iverson, that's probably not as good of an idea as it sounds in my head.  Either way, Aaron has taken a huge step forward, he's clearly a top 10 point guard right now, right?  Can anyone name 10 better?
vs.
Jarrett Jack - I was surprised to find out that Jack has only been in the league for 4 years.  I swear it feels like decades ago that he was with Portland.  Good basketball player that really is a 6th or 7th man.  He has a long career ahead of him in that role.  Starting in the NBA is only a stop gap measure for a team though.
Edge: Rockets

Shooting Guard
Trevor Ariza - His shooting has picked up a quite a bit in the last 5 games and shot selection has a lot to do with it.  Of course only playing one good defense, and having his worst shooting night of the five against Portland, has helped.  Sometimes the NBA is all about momentum and I think this recent stretch can go a long way towards Trevor's confidence.
vs.
DeMar DeRozan -  I like this kid.  He was a good player at USC and while he's somewhat raw it may be exactly what the Raptors need.  He's a strong attacker and finisher and he's energetic.  Like most young players his shot leaves a lot to be desired, but that will come if he's willing to work hard.
Edge: Rockets

Small Forward
Shane Battier - Another season, another great season long effort by Battier.  Every single team in the NBA would put him in their starting lineup no matter what it meant to other guys they have on the team.  I think I can say that with supreme confidence.
vs.
Hedo Turkoglu - For Portland fans I'm ecstatic that this signing didn't work for them.  For Raptors fans, I honestly thought it would be working out better right now.  Not because Hedo is a superstar, he's simply a really good basketball player, but because there isn't a lot to take away from his taking another step.  I don't know what has been happening with him, maybe it's the style of ball they are playing, but that 9MM contract is looking horrible right now
Edge: Rockets - Yes Hedo scores more but Battier's effect on the game is infinitely more.

Power Forward
Luis Scola -
vs.
Chris Bosh - With Calderon out, Bosh is the only guy on the Raptors that has the ability to scare you night in and night out.  I am not in any way a fan of the Rockets signing him in the off season.  He makes a team better, but not in max dollars ways.  And the Rockets have two PFs that could be here for the next 4-5 years together pretty easily.  And under no circumstances is Bosh a better center than even a hobbled Yao.
Edge: Raptors

Center
Chuck Hayes - Chuck has done his job for the most part all season.  He has defended everyone that he has been asked to with heart and determination.  Early in the season he seemed to take on the need for scoring, and has since realized it isn't necessary.  Though part of me wishes he would go back to that same effort on the offensive end to score.
vs.
Andrea Bargnani - Shows sparkles all of the time, but never seems to truly break out.  For Raptors fans, some of the best, and oddest, in the NBA I wish them more from him.  Considering he makes 6.5MM, he's actually a heck of a basketball bargain at 16 and 6 a night.
Edge: Raptors

My Prediction: Rockets build a lead early, keep it up most of the game, Raptors go on a run in the late third or early fourth and the Rockets pull back away to win by 8-14