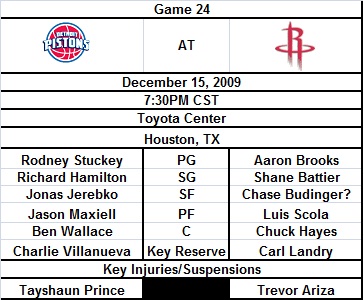 This is going to be quick and maybe sweet.  I'll be at the game in section 405 tonight with my 3 year old and we plan to have a blast.

Point Guard
Aaron Brooks -  Last preview I asked if he is a top 10 PG, I think it is pretty definitive that he is.  He's slotted number 9 on my ballot.  Can he pick it up even more with Ariza out?  Will the Rockets even ask him to?
vs.
Rodney Stuckey - Good player, fun to watch and always plays hard when I see him.  He's the future in Detroit, and while he's one of the few bright spots in that future, it's a good start.
Edge: Rockets

Shooting Guard
Shane Battier - It is hard to say anything more about Shane Battier, we are at the saturation point with his awesomeness.  Now it's time for Shane to back all that talk up (not his talk obviously) and get his shooting percentages north of Rafer-esque.
vs.
Richard Hamilton -  Came back last game from an injury and had a solid game.  He's still a really good basketball player but doesn't seem the same without Chauncey Billups.  I know he still regrets signing that extension.
Edge: Pistons

Small Forward
Chase Budinger - I can only assume that he's getting the start at small forward to keep Landry doing his work off the bench.  Obviously that's open to interpretation.  But the future NBA rookie of the year has played well all season and should get this reward.
vs.
Jonas Jerebko - I didn't even know he was an NBA player.  What is going on?  That's three teams in a row that I honestly didn't know a player.  I mean, I vaguely remember him getting drafted in the second round, but that's it.
Edge: Rockets

Power Forward
Luis Scola - There are a few guys in the NBA that I just enjoy watching, and Scola is clearly in my top 5 on that list.  He works hard every single possession and much like Battier, you have to work hard to truly quantify his value.  I'd love to see him get his scoring up 3-5 points a game, but that's not really in the cards given how strong Landry is with the second team and how the offense runs with the first.
vs.
Jason Maxiell - I expected more of him since Pistons fans have been touting him about as much as Lakers fans tout Andrew Bynum.  Instead his production has dropped off pretty much across the board, and it really didn't have a long way to fall.
Edge: Rockets

Center
Chuck Hayes - If you asked me, given how they are paid, and their production, I'd take Chuck 100 times out of 100 over Ben Wallace.
vs.
Ben Wallace - Never have I been a fan of Ben Wallace making more than 5-6MM a year.  Not because he hasn't been a hard worker, but because he is an extremely limited player.  His rebounding and defense are still strong, but not what they used to be.  The only reason the Pistons get the edge is because he is a better rebounder than Hayes because of his size.
Edge: Pistons, but not by very much

My Prediction: Rockets win by 4