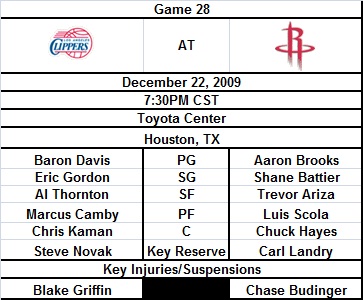 Point Guard
Aaron Brooks vs. Baron Davis - Anyone still want Baron Davis over Aaron Brooks?  I still like the guy, he's crazy entertaining.  But contract vs. contract and player vs. player, Aaron is the winner
Edge: Rockets

Shooting Guard
Shane Battier vs. Eric Gordon - Gordon doesn't turn the ball over, but he doesn't necessarily pass it either.  Of course you can't blame him for that as he is a good shooter and is the future of this Clippers team.  Look through this roster, for all the crap Dunleavy has gotten as a coach, as a GM he's done some darn nice things.  Gordon can't score on Battier with regularity if the Rockets choose to shut him down.  However, they might force him to shoot the ball and not even let him try to involve his team from the passing end.
Edge: Clippers

Small Forward
Trevor Ariza vs. Al Thornton - Raise your hand if you bought into the hype that Al Thornton was a great player waiting to happen?  My hand is not raised.  That's not to say he doesn't have a solid future.  He'll clearly be around for a long time but I just don't see this superstar that people tried to make him in to.
Edge: Rockets

Power Forward
Luis Scola vs. Marcus Camby - Has anyone been more rumored to be loved as a back-up center for the Rockets than Marcus Camby?  He's still a good basketball player but clearly not 9MM good.  Luis Scola is that good and he makes a third of that.  Last night on the 1560 No Layups show we talked about the best Rocket of 2009 and Luis Scola was my answer.  He epitomizes everything that Daryl Morey wants in a player.
Edge: Rockets

Center
Chuck Hayes vs. Chris Kaman - Yeah for Chris Kaman!  He's finally healthy and the one guy that destroys him is recovering until next season.  Kaman is a really good player, and frankly pretty underrated.  Chuck Hayes is actually a really good defender to go after Kaman and it should be pretty interesting to see how Kaman deals with it.
Edge: Clippers

Injuries/Suspensions
Houston Rockets
OUT - Chase Budinger
Detroit Pistons
OUT - Blake Griffin, the first overall pick in the draft is still out with a broken kneecap

My Prediction: I have no idea.  This Clippers team should be better than it is, and will be when Griffin gets back, but never underestimate that they are coached by Mike Dunleavy.  Rockets by 6?