Trevor's Game-Sealing Dunk Against the Hornets

Share All sharing options for: Trevor's Game-Sealing Dunk Against the Hornets

Courtesy, as always, of Clutch Fans.

I'm not going to pretend that I was watching this game with the most discerning eye, since I was mostly preoccupied with the AWESOME FREAKING SEATS I had. I was even on TV: 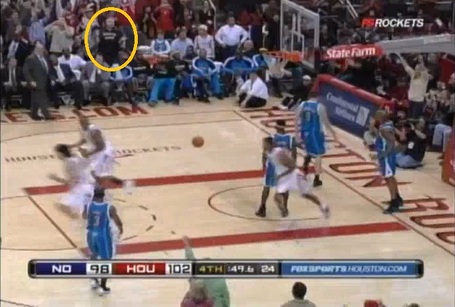 Yes, mis amigos, that lumpy, headbanded smudge is yours truly. I was like two feet from the Hornets bench. I got to heckle Emeka Okafor ("Where did they teach you to suck?") and Jeff Bower ("Maybe you'd get more calls if you didn't draft crappy players!" and "If that's the play you're calling, Jeff, it's no wonder you're going to the lottery") and tell Chris Paul to "get used to the lottery," so he'd "better ask to get traded to Clutch City." Nevertheless, I was nothing compared to the guys seated directly behind my friend, cousin, and me. Those guys put in a truly heroic effort against Okafor and Posey and were hilarious to boot.

So, uh, the lesson here is that courtside seats are pretty sweet, folks.

As for actual basketball information: