Off topic: WTF is up with the Houston Texans?

Share All sharing options for: Off topic: WTF is up with the Houston Texans?

Yes, I know this is a Rockets blog... but I'm allowed to go off-topic when I want.

That said:  what the f--k is going on with the Houston Texans???

I have three basic questions.

(1)  Why the f--k is Chris Brown throwing a halfback pass near the goalline?  First of all, there actually has to be a legitimate threat of a run before that play works.  Chris Brown sucks as a RB, so that should have negated this, but... noooooo!  Secondly, Chris Brown is not a QB and based on the last time we played JAX, everyone should know he can't hold onto the ball.  What makes people think he can throw a football?  (What we got was a modified shot put.  Ugh.)

(2)  On the last drive, why are we blitzing the QB and playing pass routes?  There was exactly a 0.0000000% chance that anyone other than MJD was going to be running the ball on every f--king play.  So 11 guys should have been running at MJD (and tackling - but that's a whole different issue).  More stupid f--king play-calling.

(3)  Why the f--k was Chris Brown not cut back in week 3 - aka, the last time we played Jacksonville; aka, the game where Chris Brown fumbled the ball at the goalline costing the team yet another "W".  Jimmy Johnson would have cut his ass right away just to prove a point and scare the team into not f--king around.  Kubiak apparently is too nice to be a head coach.  He lets this linger and the players get sloppier as the season progresses. 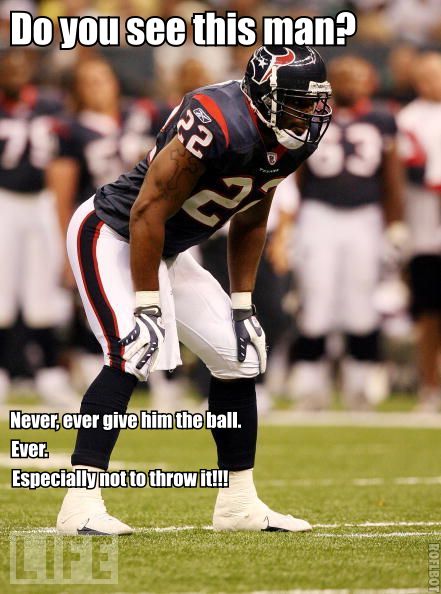