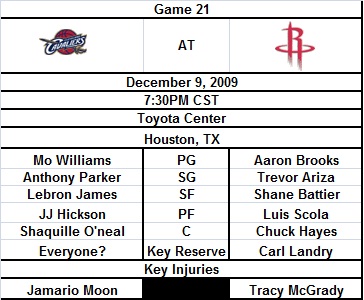 Point Guard
Aaron Brooks - A 5 to 3 Assist to Turnover ratio has to be fixed, but that is to be expected when he's being asked to be the team leader for the first time in his career.  Brooks had 3 solid games before a tough game against a team he typically torches in Portland.  He'll bounce back tonight as Mo Williams isn't big enough to body him off of his shot.
vs.
Mo Williams - Williams is not the assists man that I thought he would become playing with LeBron.  A lot of that has to do with James wanting the ball in his hands to create (who could blame him given his results).  He's doing everything on the court well, however.  Solid shooter (great 3 point shooter), and is automatic from the free throw line.  Toss in 1.48 steals a night and you have the makings of a very good point guard for the Cavs.
Edge: Even

Shooting Guard
Trevor Ariza - He's shooting too much, but therein lies the problem, because he's doing exactly what he is being asked by Rick Adelman to do.  The Rockets have said all along that they want to see what they have in Ariza so they are going to force this one him.  It's a work in progress, but you can see him making a little better decisions with how he sets up for his shot every night.  I do wish that he would never, ever shoot a three without being set.  I think I've seen exactly one of those go in all season.
vs.
Anthony Parker - In complete honesty I had no idea that Parker was with the Cavs.  I've even watched a couple of their games this year.  Daniel Gibson is statistically having the best season shooting of his career (save from the free throw line on only 70 attempts), so I guess the Cavs just like having him come off the bench.
Edge: Rockets

Small Forward
Shane Battier - It would be crazy to expect another defensive performance by Shane like he had last year against LeBron, or would it?  Did LeBron learn from last year?  Because I guarantee you Battier studied the film and saw what he did differently the rest of the season and what he's done different this year.
vs.
LeBron James- When his team has an off night it is rarely due to James not playing well.  He's shotting 51% from the field this year, by far a career high.  Add that to his career high 8.2 assists per game and 7 rebounds and the man could legitimately challenge the triple double average in another 2 seasons.  All in all, I'm finally saying it, he's better than Kobe (but not by very much).
Edge: Cavaliers

Power Forward
Luis Scola - With Carl Landry seemingly scoring 20 a night, it has been lost how good Scola has been on the defensive end as well as fitting in perfectly on the offensive end.  He scores when he gets the ball and is averaging 9.2 rebounds a game.  If anyone doesn't know why Landry doesn't start, there you go.  I've overestimated Scola's scoring this year, but that is more due to the way he is used in the offense.  For a guy that shots a lot of elbow jumpers, 51% shooting is exceptionally good.
vs.
JJ Hickson- Hickson was a strong player at NC State and continues to show why the Cavs were high on him.  He still has a long way to go, but 56.85 shooting is going to keep him on the court in a starters role.
Edge: Rockets

Center
Chuck Hayes - Chuck has been shooting the ball exceptionally poorly, even for him as of late.  The Rockets have to have him hit the majority of his 3-5 shots to beat a team like the Cavs.  They simply cannot be wasted possessions.  His defense is still very good.  There is one problem...
vs.
Shaquille O'Neal - is one of the few players in the league that Chuck simply cannot guard without Shaq having an off game on his own.  If O'Neal is being his typical last 2 seasons self, there is nothing Hayes can do.  If he is being his 2002 self Shaq could score 100.  That's not a knock on Chuck, he's a great defender, not all matchups are going to go his way though.
Edge: Cavaliers

My Prediction: Cavaliers win by 7, the Rockets simply are not the defensive team they were the last two years