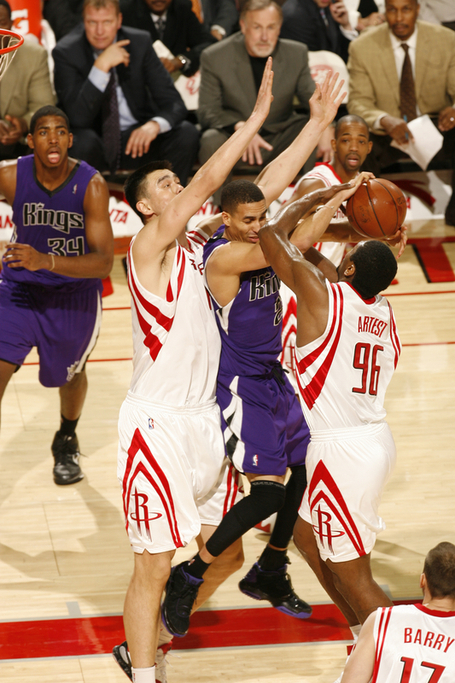 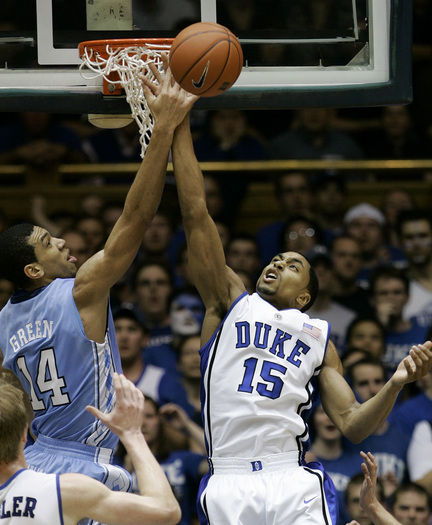 I was flipping channels all night.  After all, Duke-UNC is much more important that Rockets-Kings.  Sorry, but it's true, especially for a die-hard Duke fan such as myself.  Currently, I am in a less than charitable mood, as North Carolina killed Duke in the second half and eventually won by a large margin. I did manage to catch a large chunk of the Rockets game, and after seeing each contest, I made an observation.

Duke, collectively, is a bitch.  They get in your face, take charges with no sense of mortality, and will elbow you in the nads if you get too close to them.  Their defense is stifling and their ability to contest shots is unmatched.  True, they do have a hidden advantage: Duke is located in Durham, North Carolina, the most boring place on earth.  Therefore, players are forced to practice whenever possible to avoid getting hand cramps from PS3 parties.  But in all seriousness, these guys are flat-out annoying as hell on the basketball court.  Remember when we used to be that way?

More after the jump 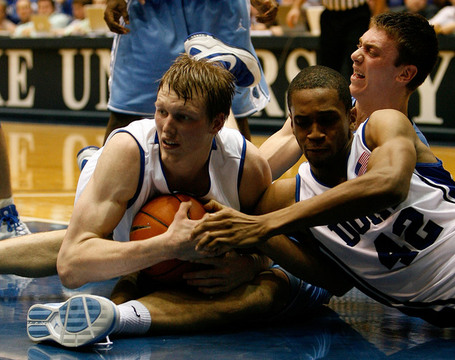 We were the Duke of the NBA under Jeff Van Gundy, and even in some ways last season.  We took charges, out-hustled opponents, and always had an impeccable will to dominate our adversaries in the non-statistical aspects of the game: close-outs, box-outs, etc.  Can't name it?  We'd do it.  That was our identity.  Despite being labeled as a weak offensive team under Van Gundy, we are actually shooting the same percentage this season as we did in JVG's final season.  We don't have an identity this year, and it would be nice if we could find one.  Hope and pray that all of the Rockets get pissed off and go back to their old ways.   And yes, I did just make a JVG reference in consecutive recaps.

There were glimpses of annoyance during the second quarter in this game.  While Sacramento did miss a bunch of the same shots that they made in the first quarter, we were contesting shots much better, and we definitely out-rebounded and out-everything-elsed them in the second quarter.  Can we somehow translate this to every game?  Can we get mad?

Now keep in mind - these are the Kings.  The worst of the worst.  While it's nice to see some effort against anyone, we were at home facing the future Rubio's.  Let's not get ahead of ourselves.  We were given Fast Passes to the paint, we rebounded with ease, and despite winning by 12, turned the ball over 20 times.  That's not going to happen/work against even mediocre competition.  Recap:

Yao Ming -- 24/18 for Yao, which is very good.  Despite this, I had a problem with Yao's game tonight.  He thought he was Magic Johnson.  Every time he got the ball, even before the double came in some cases, he would pass.  While he did take 18 shots, he should have taken about 30.  It would also be nice if he could step out on the pick and roll on defense, but that's not happening.  Otherwise, good game for Shaquie Chan.

Ron Artest -- Nice to see a 7-12 shooting night from Rawn.  He continues to be our most successful three-point option from the starters.  Defensively, he shut down John Salmons, holding him to 1-7 shooting.

Luis Scola -- Do I need to explain this?  He does the same thing every game.

Shane Battier -- Don't get me wrong: Shane played a wonderful defensive game tonight, holding Kevin Martin to 11 shots.  But I was hoping that he could do something on the offensive end tonight.  Shane has taken 10 or more shots only three times this season, and with Martin's defensive woes, I figured Shane could score in double-digits.  Guess not.

Von Wafer -- Is is a slump, or is Von falling back to earth?  Not sure, but an 0-6 FG showing isn't going to earn him any more minutes. 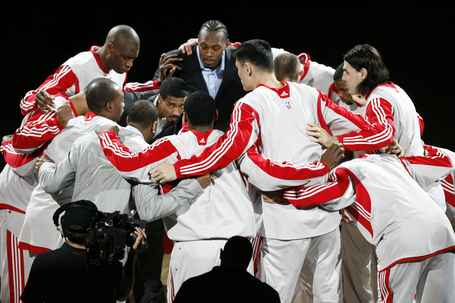 Startling Epiphany of the Night:

When we realized we were down to the Kings.  After a brief team huddle, we decided to play like our opponent was the Lakers.

Next Game: Tuesday vs. New Jersey.  Happy All-Star break to all!