Memo to All-Star Yao Ming: Get in the game...and get right back out.

Share All sharing options for: Memo to All-Star Yao Ming: Get in the game...and get right back out. 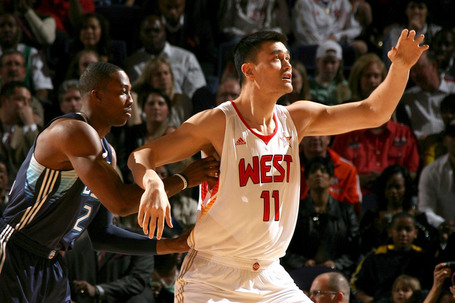 For pride's sake, I celebrate when Yao Ming makes the All-Star team.  On all other fronts, however, I am a nervous wreck.  There is no doubt that Les Alexander, Daryl Morey, Sam Hinkie, Rick Adelman, and others in the Rockets front office are as well.  While Laker fans or Cavalier fans are treated to a dunkfest from their respective stars, Kobe Bryant and LeBron James, Rockets fans take a deep breath at tip-off and hold it in until Yao comes out of the game for the final time.  And even then, he could still trip on a chair or something.

More after the jump

Kobe scored 27 points in 29 minutes.  Lebron had 20 in 26.  Brandon Roy had 14 points in 31 minutes.  And Yao Ming had 2 points in 12 minutes.  We Houstonians couldn't be more satisfied.  Yao walked off the court on two healthy feet.  He did his shenanigan for the fans and for the NBA, and he did it in perfect blandness.  It's not like the All-Star game means anything, thankfully, so why should Yao exhibit any effort?  Like I said -- we couldn't be happier.

In the past three All-Star games, 2009 included, Yao is averaging 4.3 points in 14.6 minutes of playing time per game.  In ten All-Star games, Kobe Bryant is averaging 18 points in 26.8 minutes per game.  Who cares?  If I asked you off the top of your head to name any All-Star game MVPs, you might be able to name 3 if you guessed Kobe each time.  But my point is that the All-Star game is about the empty box score - the list of players on each roster before the tip-off.  Once the game begins, fans are treated to a meaningless game that will probably be forgotten within the following week.  I am sure that you, as readers, are well aware of this, but sometimes we just need a reminder.

There was a brief moment in this contest that actually had me on my feet yelling at the television (even further proof that I have no life).  Yao decided to switch off of Dwight Howard and leave the painted area, which is like the Emperor deciding to take a stroll outside the Forbidden City.  He immediately found himself guarding King James at the top of the paint.  Instead of meeting his maker and giving LeBron a driving lane, Yao did something that made my heart skip a beat.

He broke down into a defensive stance.  Doh!

James took a dribble back (aka reloaded the bazooka), and drove right at Yao, threatening to end the Ming Dynasty with every Crab Step he took.  Even worse, Yao began to shuffle diagonally in an attempt to somehow cut James off from the basket.  I started sweating like Bruce Pearl.  "This is it," I thought.  "Yao's done."

But a savior in the form of (insert name of forgotten player) recognized this potential disaster and played terrific help defense, forcing LeBron to pass the ball and switch back onto a different defender.  Fortunately, Yao's first taste of risky business was also his last.

While Yao will always be a part of the All-Star game as long as he is healthy, it would be nice if he could simply not play.  But that's not going to happen.  At the very least, he could run away from the ball at all times to avoid getting hurt.