The All Star game and related festivities are now over.

What have we learned? 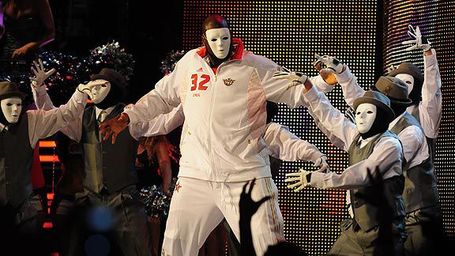 But enough about players that are only tangentially relevant to this blog.

Now that the All Star gimmicks are over with, we can focus on what is important... the race to April and the 2009 NBA Playoffs.  Of which your Houston Rockets will be taking part, no matter how badly Rick Adelman tries to sabotage our chances.

More to the point -- Thursday is the NBA Trading Deadline.  And while big names such as Amare Stoudemire, the Fat Ass, Allen Iverson and Wally Szcerbiak's expiring contract will be the talk of ESPN for the next few days... I don't care about those guys.  Unless Morey trades for them, and then I'll want to know who the hell killed Daryl Morey.

Let's begin (after the Jump)

Yao Ming -- if anyone calls asking about Yao's availability and it's not the Orlando Magic offering up Dwight Howard (and the Superman cape), the Rockets must hang up and alert the authorities to a prank call.  Yao is untouchable.  Even the Sports Guy seems to agree.

Tracy McGrady -- yes, I know we've been trying to find gullible teams to take T-Mac off our hands.  Come on Chicago... answer the phone!  Ummm, anyway, unlike Yao, McGrady is by no means untouchable.  We all know the details now.  Tracy is under contract through next season.  Next year he has a $23.2M expiring deal.  In today's NBA - that's what we call a valuable asset.  (Since McGrady's on-court value drops exponentially per month... sadly... it has come to this.).  Sorry, Tracy, but the end is near.  I think you know it. 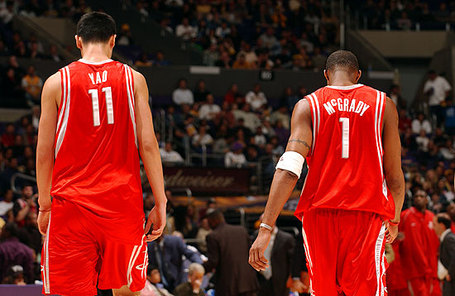 Luis Scola -- some have claimed that Scola is the Rockets' MVP this year.  They would be wrong, but I appreciate that Luis is receiving such recognition from his teammates.  I'm sure Daryl Morey notices.  Even if Coach Sleepy doesn't.  Luis isn't exactly "untouchable" like Yao, but if we receive any PF in return that isn't named "Tim Duncan" - I'm going to be very, very angry.  At $3.3M next year, there isn't a PF in the entire league that gives you more for the money.  (Translation?  Sign Scola to an extension now, Mr. Morey!!  Now!!!)

Shane Battier -- Okay, we've all seen the article by now.  None of the information revealed in the article should be surprising to any of us.  No, Battier isn't athletic.  He isn't a great offensive player.  He's not very fast.  He can't jump very high.  He can barely dunk.  And yet....... he's the prototypical "Moneyball" player of the NBA.  So it's unlikely he's going anywhere.  But....... (there's always a "but")... Battier isn't getting any younger.  He'll be 31 next season.  His contract also expires after next year ($7.3M in 2010).  He may be our only legitimate trade option.  Conclusion?  I don't think Morey lets Shane go, but I also don't see us giving Shane a raise for 2011.  Stay tuned.

Crazy Pills -- I have a bad feeling that the Crazy Pills era is about to end.  Artest has an $8.4M cap number which expires this summer.  He's playing for a contract, but he hasn't been able to play nicely with Tracy McGrady.  I also don't think Artest will re-sign with the Rockets if McGrady remains on the roster.  Morey may take this opportunity to move RonRon this week... while he still has value.  This makes me sad, but it's altogether not that surprising.

Rafer Alston -- I want him gone.  But I also do not see a viable market for "point guards that can't pass or shoot and tend to drink and drive."  Especially when said point guard is on the wrong side of 30 and is a known head-case.  Then again, once McGrady is truly out of the picture, maybe we'll see the true Rafer.  He does have positives - he's careful with the basketball, is good off the dribble and doesn't turn it over in traffic.  He's not anti-clutch (if not exactly "clutch").  And the worst part?  I think we actually won the Rafer for Mike James trade........ how sad is that?

Aaron Brooks -- Okay, I like Aaron a lot.  But we have to acknowledge the fact that he's never going to be a top 10-12 PG in the league.  He's a very, very good backup PG, but his midget-qualities will forever make him a liability on defense as a potential starter.  That said, I don't see Morey trading him anytime soon.  Brooks will be a Rocket for at least a couple more seasons.  And he's still inexpensive under his rookie deal.  This is good.

Carl Landry -- I hate to admit it, but Landry has regressed lately.  I love his energy and hustle, but he's become too much like Chuck Hayes in that he commits wayyy too many unnecessary fouls and takes himself out of games.  Which means Landry and his $3M deal could be packaged with Crazy Pills if the Rockets make any notable trades this week.  Then again, Landry could be seen as the hybrid small-forward/power-forward of the future if Artest, McGrady and Chuck Hayes leave.  Landry is the one athletic piece of our roster that other teams might see as an asset.  This is good and bad all at once...

Brent Barry -- he's old.  And he might be banging Mrs. Adelman.  But he's a Rocket until his contract expires.  At which time he'll retire.  No further analysis needed.

Von Wafer -- the 12th Man in October who worked himself into the top 8.  Von Wafer is the third-best player on the Rockets this year.  Yes, really.  Then again, once Crazy Pills and T-Mac returned from their twin sabbaticals, Wafer has been reduced to limited minutes and garbage time appearances.  Which have killed his rythym and his efficiency.  Wafer's contract also expires after this year... which means there's a very good chance he played himself into a big contract the Rockets cannot afford for 2010.  This makes me sad.  I don't see Von getting traded this week though.  Unless Morey sees it as a "sell high" opportunity.  He's smarter than I am, so maybe that's exactly what he's looking at.

Chuck Hayes -- Chuck was extremely valuable.  And then the Rockets traded for Luis Scola.  Then they drafted Carl Landry.  (Then they traded for the draft rights to Joey Dorsey...)  Hayes is now marginalized in his role on the team.  Which isn't unexpected because his level of athleticism makes Shane Battier look like LeBron.  Chuck's D is excellent, but not so excellent as to make up for his 0% efficiency as an offensive player.  Chuck has little future on the team... though he's not much of a trade asset.  Hmmmmm... at least he's not the next guy.

Luther Head -- belongs in the trash heap that Luke, Leia, Han and the gang fell into in Star Wars.  No one wants Luther.  Least of all the Rockets.  We've been trying to trade him for 2 years now. With no success.  The team can make a $2M+ qualifying offer to Luther this offseason.  But that's not going to happen.

Dikembe Mutombo -- this is his last season.  He's not getting traded.

Joey Dorsey -- We better not trade him.  For I'd lose my best source for material.

So, after all that... I have NO idea what's going to happen to the roster before, during or after Thursday's deadline.  Jerome Solomon hinted that a deal we will all like is being discussed off the radar.  I must say -- it's making me curious.  And nervous.