A hypothetical conversation between Daryl Morey and Kiki Vandeweghe

Share All sharing options for: A hypothetical conversation between Daryl Morey and Kiki Vandeweghe

The following is a conversation I hope is going on right now... 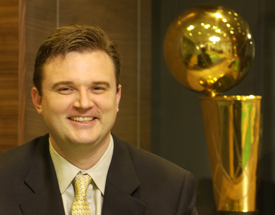 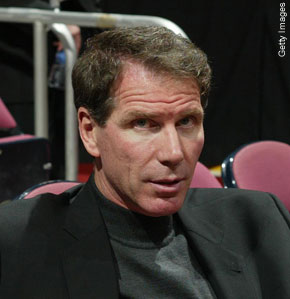 Morey:  Based on the standings and my up-to-date statistical analysis, certainly not your team.

Kiki:  What's our record?  I've been busy doing my motivational speaking thing... but I thought the Nets were good this year?  Doogie Howser is our coach, how could we possibly be bad?

Morey:  Hey, Normal Dale is our coach, but the assclown won't stay awake.  Seriously, Kiki, my time is valuable.  I'm watching all the episodes of The Big Bang Theory I stored on DVR right now.  What do you want that could possibly be more important than that?

Kiki:  Let's just say I have an offer you won't be able to refuse.

Morey:  [pulls out graphing calculator, pen and paper]  Okay... go.  What's your offer?  And if you even say the name "Yao" I will have you killed.

Kiki:  Kenyon who?  Ummm, anyway, no.  I hear you might be interested in Vince Carter.  I also hear that Ron Artest is being Ron Artest-like again.  So, what do you say about Vince Carter for Ron Artest and Luis Scola?

Morey:  [grimaces, puts down calculator]  That doesn't even work under the cap.  Do you even know who Luis Scola is?  Or how valuable he is for his salary?

Kiki:  He sounds European, so he's gotta be good... and everyone keeps telling me I need to trade Vince.  Why?  What's the problem?

Morey:  How 'bout I say "no" and you make me a better offer?

Kiki:  A tough negotiator... I like that!  You'd fit right in here in Jersey.  Well, I'm sure you want Vince Carter, so what about Ron Artest and Carl Landry for him?

Morey:  Again, you are aware there is this thing called a "salary cap" right?  Or is that why the Denver Nuggets fell apart when you were charge there? 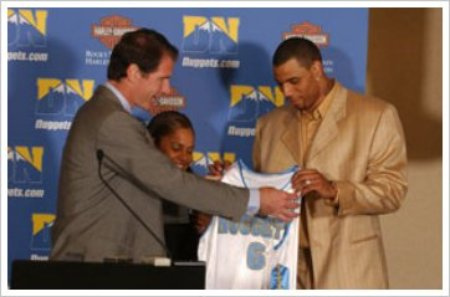 Kiki:  [scans NBA.com to see who is on the Nets and Rockets rosters]  Ummmm, okay, so we have Vince Carter.  And you have Tracy McGrady?  Hey, aren't they related or something?

Kiki:  No.  Tracy makes more money than me according to HoopsHype.  We just can't have that.  Besides, I'm the only one allowed to have a girl's name here!

Kiki:  Okay, okay, I see we may  not be on the same page here... how about Vince Carter for Ron Artest, Shane Battier and Carl Landry?

Morey:  First, I'm not doing any trades unless you take Luther Head.  Second, did you not see Michael Lewis' article on Shane Battier and myself?  Clearly not, for you would have learned that Shane is the most valuable statistical player in the NBA and that I am a genius for recognizing this before anyone else.  Moneyball ain't got shit on me.

Kiki:  Well, you gotta trade value to get value!  I read that somewhere.  Or something.  I think.  Hmmm... okay, what about Vince Carter and Josh Boone for Ron Artest, Shane Battier, Carl Landry and Luther Head?

Morey:  [clearly annoyed]  Ummm, that's an interesting proposal.  I'll have to get back to you on that after I confer with our owner.  How 'bout I call you on Friday to discuss this again?

Kiki:  That would be fine!

Morey:  [hangs up.  Has Kiki's number blocked by cellphone provider.  Returns to watching TV and relaxing.]

Kiki:  [e-mailsChad Ford at ESPN.com with message "hey, Chad, it looks like the Nets have a deal to acquire Ron Artest and some other guys in exchange for Vince Carter... make sure to put it in your rumors.  I like reading about myself in your Internet entries!"]