"What am I going to do with 50 subscriptions to Vogue?"

Share All sharing options for: "What am I going to do with 50 subscriptions to Vogue?"

Tracy McGrady may be done for the season...
at least according to STEPHEN A. SMITH.

Which means this may be my last opportunity to use this photo! 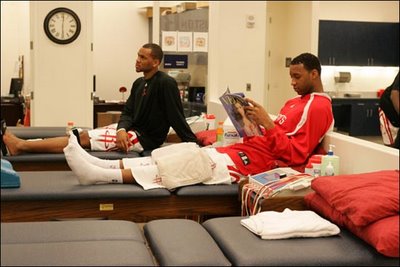 The only players to have any post-microfracture success in the NBA are Amare Stoudemire and Jason Kidd.  And it's not like Kidd was ever relying on his jumping ability to succeed.  Amare was 22 when he had the procedure done.  Tracy is a long, long way from being 22.  Unless we are talking about millions of dollars he is going to count against our cap next year... a year he probably won't be able to play.  At all.

If the news is true, I feel really bad for T-Mac.  Because it's unlikely he'll ever suit up for the Rockets again.  His chances of re-signing with us for the 2011 season are definitely non-existent now.

On the flip side?

(The Rockets will make the second round of the playoffs!  Book it!)