Share All sharing options for: Deep Thoughts on the Rafer Alston/Kyle Lowry Trade 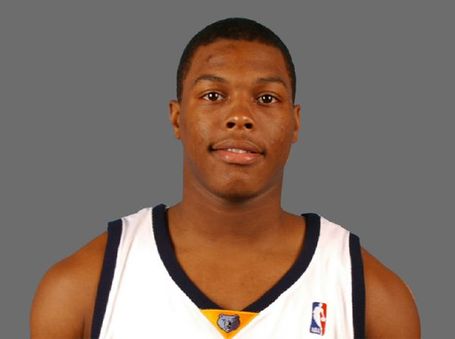 Daryl Morey made a move, but it wasn't the one we expected.  Everybody considered any one of the following players to become a Rocket at some point in time:

As for moving Rafer, we considered another list of qualified candidates:

But, alas, we ended up with Kyle Lowry of the Memphis Grizzlies.  And some bums that won't be here long.

Before I did any researching, I e-mailed Joshua Coleman from 3 Shades of Blue and asked for some general thoughts on Lowry.  Here's what he had to say:

Kyle Lowry is a bulldog. He is full of tenacity, intensity and determination.  He plays with a ton of energy anytime he's on the floor.  He doesn't have a great jumpshot at this point, but he looks to push the pace pretty often, resulting in a lot of transition opportunities.  He's not really your traditional point guard, as he isn't a great playmaker, but with a quality post presence like Yao Ming on board to dump the ball into, I suspect that shortcoming should be masked fairly well.  He's very physical on both sides of the ball and has established a reputation for being a very good man-to-man defender.

Jump.  You know you want to.

According to Joshua's sentiments, we've got a few things to work with.  He's a great defender (according to some, he has All-NBA defensive team potential), can out-hustle you, and isn't afraid of anything.  While it was noted that Kyle isn't a great playmaker, he probably hasn't been in many big-play situations at this point in his career, so there is defnitely room to improve on that label.

I've seen Kyle play in college and briefly in the NBA.  He's one of those guys who I thought had a ton of potential but should have stayed in college.  Lowry chose to leave Villanova after one season, and was drafted with the 24th overall pick as an extremely raw talent.  Normally, I want players to stay in school and get an extra year or two of development, but I thought it was especially prevalent in Kyle's case.  From what I saw, he was, like Joshua said, a bulldog.  He could get in the lane by means of either quickness or just pure desire.  He played taller than his height, was a gifted and determined defender, and had a decent jump shot. 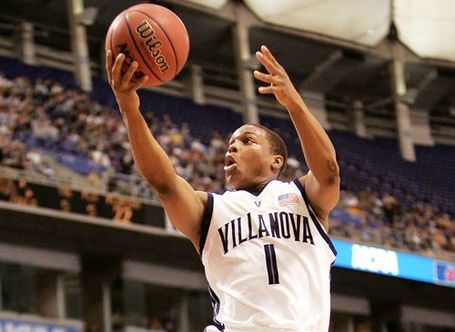 However, in watching Kyle play, I kept asking myself the same question: Is he really a point guard?  Again, my observations of Lowry have been brief, but he seems a bit too trigger-happy to be a point guard.  He's a 2-guard in a point guard's body, and that normally causes trouble.  His passing skills were never on display, and until I double-checked how short he was, I always thought he would be a 2-guard in this league.  Obviously, the Grizzlies decided that Mike Conley would be a better pure point guard than Lowry in the long run.  Having said that, nothing is set in stone, and also having watched that Villanova team play, I also got a good look at Randy Foye.  Foye had questions as to what position he would play in the NBA as well.  But after a few seasons and endless complaints from fans about how they wish they'd kept Brandon Roy, Foye is looking much better, and is looking like a true point guard.  He's averaging about 5 assists per game now, close to the same number as one Rafer Alston has averaged here in Houston for the past three seasons.

While I'm not saying that Foye and Lowry are one in the same, I am pointing out that a player with the same college background and same questions coming into the league was able to develop nicely up to this point.  Foye isn't quite there yet, but he's taking huge strides.  Lowry may not be as good as Foye, but he is certainly two very important things: 1. Talented, and 2. Young.  He's only 22 years old, folks.  He's got time to develop, and while we may not have time to see it happen to its fullest extent, we can at least hope for some quick improvement based off the commonchange of scenery.  Look at Devin Harris, for example.  He was held back in Dallas amid the scheme they ran under Avery Johnson, but once he moved on to New Jersey, he was able to showcase his game.

Lowry may be the same way, only, yet again, not at the same level.  He's now got a go-to post man to throw it into, and I am hoping that the veterans that we have in Houston will calm his obsession with shooting so many threes, because he isn't very good at it (25.8% career).  He's also not very turnover prone, and his free throw percentage has improved significantly this year.  In addition to that, while many people may whine that he doesn't get assists, he averaged 4.8 assists in the 21 games that he started this year.  So that's that.  Basically, what I'm banking on is that Lowry can become a smarter player in Houston and properly use all of the talent that he has.

Though not to the degree of Dave, I've never liked Rafer that much.  I've said why that is many times, so I don't feel the need to repeat myself. 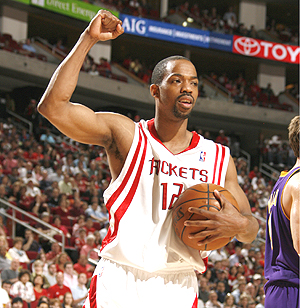 I was listening to Carl Dukes on ESPN Radio today, and he said that a major reason not to trade Rafer was because he was our "vocal leader."  I have a big problem with that.  It seemed to me that Rafer was our volunteer leader rather than our true leader.  When he spoke, it was always about "we aren't doing this right" or "we need to do this better."  It was never "I'm not doing this right" or "I think we're doing this well," normally things that a leader uses in context.  And better yet, a leader needs to be trusted, and based purely off of statistics, it would be tough to trust Rafer on the court.  He's streaky by nature, and while you may rely on him one game out of five, he's not consistent enough to be a leader.  Ron Artest, Shane Battier, and hopefully saavy vets like Brent Barry and Dikembe Mutombo - they are the candidates to be the leader of this team.  In Tracy's absence, a new leader must step up, but it was never going to be Rafer.  Shane handeled the media well - hopefully he does some good in the locker room as well.

Losing Alston rids us of money, bad shot selection, and a tendency to screw up fast breaks.  But it also loses us someone that, on occasion, can step up, hit a big shot upon receiving a pass, will not turn the ball over often, knows how to run the offense, and can play good defense.  Hopefully Kyle Lowry will fill the voids that Rafer's departure opens up.  In my mind, however, the bad's out-weighed the good's, and contrary to what many believe, this is not a white flag.  Rather, it's a fresh red one.

How Lowry Fits in with the Rockets

Aaron Brooks will probably start at point guard, thus receiving a boost of confidence from Daryl Morey, but at the same time, also receiving some brand new competition.  I think we will fare quite well with this tandem.  They are both quick and relentless, and Aaron has played well enough of late to merit this promotion.

Lowry is going to be a backup for now.  He's going to have to learn Adelman's Offense 2.0, but that shouldn't be as difficult as some have made it out to be.  Once aquainted with the offense and the general customs of the Rockets, Lowry will be on the spot to perform well.  We didn't trade Rafer to merely clear cap space; we made sure to get someone who, raw as he is, will be expected to help us as the stretch run nears.  It will be interesting to see how he manages to fit in with us, but his role for now will be as a backup.

What's Going on in Morey's Mind?

Nobody truly knows what Boy Genius is thinking.  We speculate, but often times, like in this instance, we miss the boat.  As for this trade, I'm not sure what specifics Morey is looking into, but I do trust him whatever the case may be.  It's rare when you can trust a GM never to screw up, and while he may eventually make a mistake (could be this trade itself), at least we are confident that he has looked at every single statistic or scenario possible.  Once that has been done, he lives or dies with his decision.  Morey may mess up in time, but he surely won't miss anything, and on this occasion, I think he made a very good deal.