Share All sharing options for: While L.A. Groans, Houston Grins 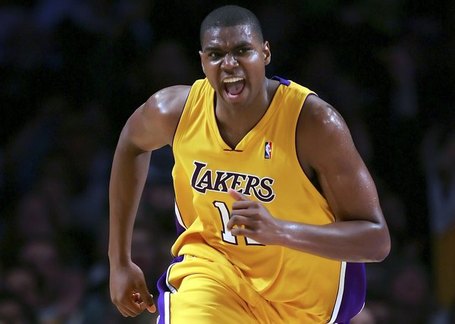 Word out of Los Angeles is that Andrew Bynum has an MCL tear.  He's out 8-12 weeks, the second straight year that he is going to miss an extended period of time.  What is interesting about the diagnosis is that Bynum's timetable for return last season was also 8-12 weeks, which of course proved to be wishful thinking. After January 13, 2008, Bynum never saw the court again.  And that was with a bone bruise and a slightly dislocated kneecap.  Think ligaments are any more fun?

Last season, Laker Land dealt with Bynum's injury by finding some crap in the back of their closet and sending it to Memphis for Pau Gasol.  Once Gasol stepped in, the Lakers went back to winning.  They lost 2 games in February and 1 game in April, and eventually got all the way to the NBA Finals.  But once in the Finals, their lack of depth in the frontcourt hurt them severely.  This season, that question was supposed to be answered.  Now, nobody is certain what's going to happen.

While Laker fans mourn Bynum's loss, I laugh.  Undoubtedly, many fellow Rockets fans will do the same.  Not at the injury itself, of course, but at the situation, one with which we are quite familiar.  Star big men in suits is old news for us - we've gone through it for the last four years.  We've had to play an excuse-happy brand of basketball since 2005.  If this, if that, coulda, shoulda, woulda - every Rockets fan has been brainwashed to tag injuries as normal.  We expect it.  We write and predict and hope with an asterisk.  And for those last four years, we've learned to play through it.  22 games in a row was incredible enough, but the fact that Yao watched the second half of the streak on the bench was even more amazing.  On the contrary, Laker fans must feel personally attacked.  They haven't had to go through repetitive injuries before.  Two years in a row with no Bynum?  I want a refund! 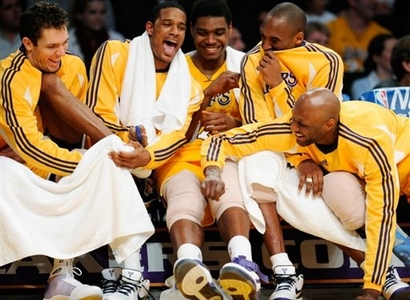 Once lightening strikes the same player twice, labels are unleashed.  He's injury prone, he's a liability.  Think Jack Nicholson wants to see Josh Powell out on the court?  Or Chris Mihm?  No, he wants Bynum, and he won't get Bynum.  Starting now, Andrew is fragile.  He's a FedEx package.  Fans, players, and team execs alike begin to wonder if the term "freak injury" can apply to someone who goes down at the midway point every season.  They wonder if he's worth building around, if he can be trusted.  If you disagree, look at Portland.  Greg Oden goes down on opening night, and everyone immediately shouts "Bust!  He's a bust!"  Which is unfair, because Greg Oden and Andrew Bynum may be the next great centers in the NBA.  But their injury histories can't be ignored.

However, in most cases, injury-worries are only temporary.  Next season, if Bynum comes on strong, they're all going to forget.  Same goes with us in Houston.  Though we may be used to seeing Yao grabbing his leg in pain, the thought briefly escapes our mind when he strings together a 20-game health streak.  Then he hurts his foot, and everyone panics.  Again.  We immediately sign Dikembe Mutombo, and when Yao comes back, we hold our breath until he plays five healthy games or so.  Then we go back to normal.  It's an endless cycle.  So what can be done about it?  Preparation.

The Lakers must learn to prepare.  Bynum can no longer be trusted, and while it is unfair, it is also the reality.  They've got to get even deeper at the center position, and if not before the season, then during.  Though Houston and Daryl Morey didn't make an effort in the off-season to sign or draft a back-up center, we prepared.  We cut cap room and put Deke on our ink radar.  Then when the time came, we brought him in.  Last year, the Lakers were forced to scramble.  Chris Wallace isn't going to give them an all-star again, and I can guarantee that they don't have enough to offer to entice anyone else to as well.  They're stuck with the roster they've got, unless they want to waste money on some free agent bigs that won't amount to much. 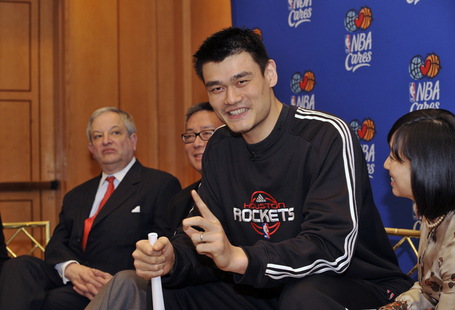 Yao relishes the fact that he's got one less big man in the West to worry about after Bynum's injury.

Thanks to L.A.'s laziness, Houston fans can hope.  With Bynum out, the Lakers are no longer Western Conference guarantees.  They are still a top 3 team in the West, but now they can be beaten more handily.  Last season, Gasol surprised everyone, not with his talent, but how he fit in with the Lakers.  This season, he's been caught on tape.  Teams can prepare for the Lakers con Gasol with much more ease in 2009; they've seen him interact with his Laker teammates and know his tendencies in Punxsutawney Phil's triangle offense.  You might say, "Well he's dominated this season regardless of tape."  That may be true, but that was with Bynum - now he's all alone in the paint.  If there was any reason the Lakers could lose in 2009, it was their lack of frontcourt depth.  They've got Odom, Vujacic, Walton, Farmar, and Ariza on the bench, but none of them can guard Yao Ming.  Now they're even thinner.  It's up to them to find what talent they've got (and they've got plenty of it), and get as much from it as they can.  We sucked our ability dry last season, and all it got us a first-round playoff exit.  How will this year's Laker squad deal with Bynum's loss?  The door is open for all teams in the West.  Can the Rockets take the first step through?

With The Streak Part 2 in session, this is a God-send.  Let's make the best of it.