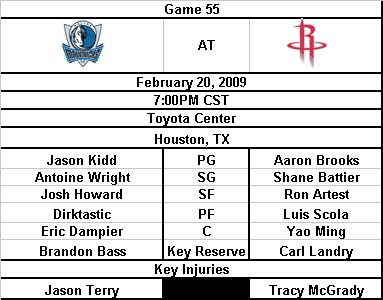 Oh happy day!!! This is easily one of the top 5 highlights of my game preview writing "career". I don't have to put Rafer Alston in as a starter ever again (okay I guess I do when we play the Magic). Add that to the fact that I don't have to see Jason Terry go off for 35 because he's hurt and my night is looking good!

Point Guard
Brooks - Welcome to the big time young sir, now go out and try not to get posted up by Jason Kidd. And remember, he has no jump shot so make him take that.
vs.
Kidd - Playing much better this season than last, but he's still 70% of the way to washed up
Edge: Even, sorry Mavs fans, Kidd just isn't that good.

Shooting Guard
Battier - Unsung no more, it's time to see the Battier of the last few games more often.
vs.
Wright - He's an Aggie basketball player, or is that "Former Student (kind of) Association basketball player", either way, enough said
Edge: Rockets
Small Forward
Artest - He is going to eat Howard's lunch tonight. I full expect Artest to step his game up and push for a new contract. I even think it's possible that this new contract has Houston Rockets at the top.
vs.
Howard - I used to like him, but I have no respect for an American that doesn't respect their country and what it has given them. That said, he's a really good basketball player.
Edge: Rockets

Power Forward
Scola - Now the number three option on the team. Me likes this, me likes this very, very much. He's capable of 20 a night but I'll settle for 18.
vs.
Dirk Nowitzki - I hate that I like him so much, it hurts me deep inside to like a Maverick as much as I do Dirk. But I will say this, he is a flopping be-otch
Edge: Mavericks

Center
Yao - This is unequivocally Yao's team, Rafer nor Tracy can try and take it away from him. By the way, have you ever seen a center that so clearly did not get the touches he deserves dominate the way Yao does? I can't wait until Aaron Brooks passes him the ball 45 times tonight
vs.
Dampier - Harking back to the day that Dampier said he would be the best center in the West will never get old.
Edge: ahahahahahahahah - Rockets

Houston Rockets
OUT - Tracy McGrady, for the season it appears, and frankly, for the sake of team chemistry, I hope it stays that way

Dallas Mavericks
OUT - Jason Terry, and thank the good Lord for that. He always kills us.


My Prediction: Aaron Brooks steps up to the plate and leads the Rockets to a victory. Rockets by 11 for Yao