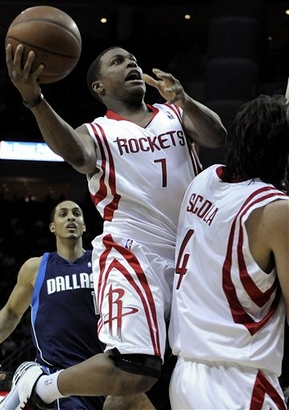 Kyle Lowry goes up for a layup against his own teammate, Luis Scola.  Hey, Kyle, you got traded, remember?

Note: In case I haven't explained this, I don't always get the chance to see games on the weekends, but in some rare cases, you'll actually get analysis.  I managed to catch most of tonight's game, so you get a nice, long recap.  Hooray.

I'm pumped up.  Like, extremely pumped up.  To the extreme.  And it's not that I think we will suddenly be an amazing team based off of this win.  That's not it at all.  I'm just pumped for this team!

The energy in Toyota Center reminded me of...(deep breath)...The Streak.  I'm serious - I felt like I was watching last year's team play.  The energy from the players and the fans was contagious.  We finally had that chip-on-our-shoulder mentality that we've lacked throughout the season thus far.  With Tracy McGrady and "The Big 3" in the lineup, we almost felt entitled to win games.  We waited for one of our "Big 3" to step up and carry us, and because we had our very own "Big 3," we thought we would instantly be dominant.  That obviously wasn't the case, and now that our roster has finally been permanently changed, we can move on from that false sense of entitlement.  We're bulldogs again, like our new pal Kyle Lowry.  We're going to go right at the opponent with everything we've got, and we're going to do it behind the Great Wall of Ming.  Best news of the night?  Rafer went 1-9...for a different team!  And even better; Yao and Ron led our team in shot attempts.  Why was that ever any different?

After the game ended, I kept thinking to myself, "If we had T-Mac, could we have come back from this deficit.  Would we have had the motor or motivation?"  Answer: probably not, which is unfortunate, but true.  This team, a team that is now 8-1 with Aaron Brooks in the starting lineup, has finally overcome the hangover that playing with Tracy had become.  In a sense, they've been freed.

However, I don't want to get too ahead of myself.  We're the kings of inconsistency, so I'll postpone any further bold statements until we start to do this on a nightly basis.  But this was an excellent building block to start with.

Did I mention I was excited?  Let's recap:

Aaron Brooks -- Welcome to the show, young man!  How does 17/6/8 with 2 steals sound for a first game?  And even better, we started a point guard that finished not first or second, but third in shot attempts.  Aaron stepped up big in this game, and while he is going to have to start taking better care of the ball, this could have been an ugly beginning, as transition periods often are.  This was a great game for Aaron, and I'm excited to have him as our "vocal leader" starting point guard.

Yao Ming -- What's new?  Yao went 22/13 and had 6 turnovers.  Typical numbers from The Dynasty, both the good and the bad.  While it's something he will need to continue to work on, I'm just in love with the fact that Yao will be getting more shot attempts.  However, there was one problem with Yao tonight, or at least with Yao's defensive relationship with Young Man Lowry.  Kyle is used to having a big man that can step out on the pick and roll (either Hakim Warrick or, in rare cases, Marc Gasol).  Yao can't do that - he's terrible at it, but how agile can you expect a 7'6 guy to be?  In any case, Lowry is going to have to learn to go over the pick and not under it, as J.J. Barea killed us from three point range.  Don't mislabel this lack of understanding as "bad defense" by Lowry.  It's just going to take a little while for the two of them to jel.  Oh, and get this man some knee pads, Hakeem style.

Ron Artest/Luis Scola -- I'll give it to both of them; they each deserved recognition for their play tonight.  Artest shut down Dirk Nowitzki (thus evoking the Fantasy Sports Paradox, as Dirk is on my team), and Scola was crashing the boards like a madman.  And if I haven't mentioned it up to this point, I am in love with the defensive potential this team has with Lowry in the game.  A Lowry-Artest-Battier lineup would be uncommonly tough to score on.  But anyway, as long as Artest (who is playing for a big contract next year as he steps back into the spotlight) and Scola keep playing with this intensity, we will be a much more consistent team.  Was that a really obvious statement?

Von Wafer -- He's a shooter, and all shooters will miss at some point.  But Wafer had a few wide-open looks tonight that clanged off the rim.  It's tough to criticize him too much because he was coming off of a great performance, and he overachieved like hell in his first few weeks of play.  But we are going to need him to be our attacking wing player off the bench, and hopefully he'll regain some consistency soon.

Chuck Hayes -- Get rid of the floater!  You have no excuse now that Rafer is gone.

Daryl Morey -- LeBron James had 50 points toinght.  Why didn't Morey trade for him?  Geez, what an idiot.

This man can get in the paint.  And he can sure play defense, even if it wasn't on display tonight.  My favorite part of Lowry's first game tonight was his number of fouls (4).  Normally, players are scorned by fans for getting in foul trouble, but in Kyle's case, I was glad to see it.  He's a fighter, and he's going to give it 100%, even if it means fouling someone.  And I'm okay with that.  6 points and zero 3 point attempts (for all you "haters" out there) in 14 minutes is fine by me for a backup point guard's debut.  He was very efficient tonight, playing his best Moreyball possible.  Oh, and do you know who else wore number 7?  John Elway.  You connect the dots.

Rafer Alston: 1-9, 3 points.  Does anyone think there is a problem with adding a streaky shooter to a team whose weakness is...streaky shooting?

Much-Maligned Coach of the Night:

Rick Adelman.  Rick had to work a new player into the rotation tonight as well as deal with Artest's early foul trouble and Brooks' eye cut.  I thought he did a wonderful job managing everyone's minutes and using his substitutions effectively.