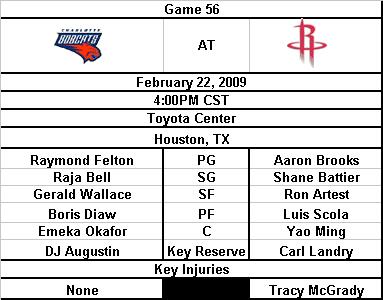 I'm getting ready for the rodeo cook-off tomorrow, so I'm going to go ahead and do this for tomorrow. We'll be in booth A-209 if you feel like saying hello next weekend.

The Match-Ups:
Point Guard
Brooks - Needs to cut down on the turnovers, but he pushed the ball and scored basically at will, he had a really good first game as the man. Raymond Felton should be an interesting match-up for him.
vs.
Felton - Should be better than he is, I don't see enough (read any) Bobcats games so it's hard for me to say with any certainty what's wrong. I can say that he won't be the starter in Charlotte next year though.
Edge: Rockets

Shooting Guard
Battier - Does everything the teams asks of him and more. He looks like his foot isn't bothering him anymore as his defense is coming on full bore of late.
vs.
Bell - Not the player he once was, was never the player that some thought he was, ever.
Edge: Rockets
Small Forward
Artest - Dominant defensive performance on Dirk the other night and his offensive game had the type of flow we've only seen 6 or 7 times this year. I expect this the rest of the year.
vs.
Wallace - Is it just me, or does this team have about 8 guys that would be incredible 3rd players but none that are really quite there to be a number 2?
Edge: Rockets

Power Forward
Scola - If Scola has something similar to 15 and 15 every game, he will be the greatest 3rd option in the history of the universe. Okay, the planet, but only because I have no knowledge of basketball anywhere else.
vs.
Diaw - He's a Frenchy, we don't take to kindly to his kind round these parts
Edge: Rockets

Center
Yao - Okafor can't stop him, he can't even hope to contain him
vs.
Okafor - He's paid infinitely too much money, but is a very solid player. He's a Houston boy and we definitely like him, but he's not really living up to the hype set forth for him around here.
Edge: Rockets

INJURIES
Houston Rockets
OUT - Tracy McGrady, for the season it appears
Charlotte Bobcats
OUT - None


My Prediction: Rockets take care of business and win by 15+, I'm probably getting ahead of myself, but the team as put together right now will not lose games like this.