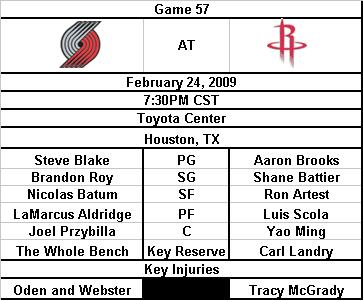 Point Guard
Brooks - He is playing really well since Rafer has left, improving on his first game performance. Steve Blake can't keep up with him but Jerryd Bayless can.
vs.
Blake - One of my favorite "average" point guards. He's one of the guys, along with Lowry and Hinrich that Dave and I have plead for the Rockets to find a way to get. He's a great fit for the Blazers as well, a very good calming source for the team.
Edge: Even based on the speed of Blake and the inexperience of the other three

Shooting Guard
Battier - He'll have his work cut out for him tonight playing a top 2-3 SG in the NBA. Shane can definitely frustrate Roy, but Brandon is the type of player that can overcome great defense. This is going to be the match-up of the night
vs.
Roy - He of the last second three point shot from early this season, robbing Yao Ming of his own basketball heroics. It's no secret that I love this guy, he's everything that is right about the NBA, kind of like Chris Paul. It still makes me sad that the Rockets missed out on him.
Edge: Blazers
Small Forward
Artest - FINALLY, the Ron has come back to destroy the league. Cannnnn you smellllllll what the RONNNNNNN is cooking.

Power Forward
Scola - Quitely dominating opponents
vs.
Aldridge - I can't be rationale as I'm a Longhorn and LA fan
Edge: Even - Aldridge has the talent edge by a good margin, but Scola will out hustle him all night. This match-up could go either way, with Scola capable of shutting Aldridge down and Aldridge capable of going off. LaMarcus' lack of consistency and Scola's complete consistency make this even

Center
Yao - Getting his shots, making his shots, leading this team to victory
vs.
Pryzbilla - Infinitely better than I expected him to be,but not in Yao's class
Edge: Rockets - This match-up should swing the game wildly in the Rockets favor

Houston Rockets
OUT - Tracy McGrady, for the season it appears


My Prediction: Questions, questions, questions... I said in my rest of the season preview that the Rockets would lose this game. My thought there was two fold. The Blazers are extremely athletic and are the type of team that isn't scared of anyone and the Rockets at the time were still possibly playing McGrady and definitely playing Alston, those have both changed. I think that the team mentality will not be to look ahead, but that's hard to do with the Cavaliers coming into town. The Blazers are not built to beat the Rockets without a completely healthy Greg Oden at least playing up to some of the hype. I'm going with a toss-up here, one team or the other by 3-4