It's so hard to say goodbye (you suck, Rafer!)

Share All sharing options for: It's so hard to say goodbye (you suck, Rafer!)

It has been nearly a week.  It just hit me now that I must retire my "Rafer Alston sucks" tag.  It was a fun ride while it lasted.  And I don't mean actually watching Rafer play... good God, no!  I mean... being able to write multiple entries about how much I despise watching Rafer Alston hold my favorite basketball team back.

Lee suggested I do an appendix of sorts -- a listing of everything we've ever written about how much Rafer Alston sucks.  Not surprisingly, it is a lengthy index.

As you can see, there are 51 entries under "Rafer Alston sucks" just in the last handful of months:

There are even a handful of entries for "old ladies hate Rafer too" -- and trust me, it was a true statement when we first started using this tag.  Some old ladies behind us at a Memphis/Houston game hated Rafer almost as much as we did!

Let us also not forget the "I don't care what the box score says - Rafer Alston sucks" tag.  That was fun to use when everyone tried to defend him with his assist-to-turnover rate.

And... how could I forget the simple "F--k you Rafer" tag?  SBNation is happy to see you go if only to help me limit my use of random F bombs!

So, yes, I now accept the fact that my leading source for blogging material has left and gone away.  (yay!)  And it would be mean to pick on Tracy McGrady now that he's gone the way of Penny Hardaway.  The craziest thing of all is that I now like every single member of this team.  There isn't a single player I subconsciously want to fail.  I can't remember the last time that happened... well, I can and it was 1996.  Then we traded Robert Horry.  Dammit.

I guess that means I have someone new to focus my radar on: 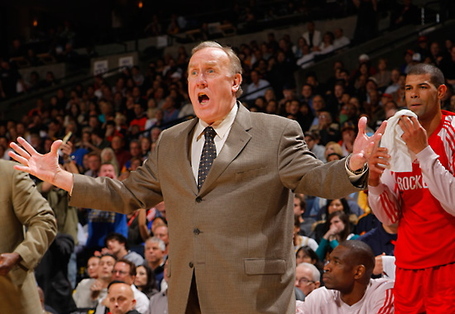 Yup... it's you, Coach Sleepy.  Don't act like you're surprised.

Not that I am saying you should be fired.  I think you are an excellent coach.  When you are awake.  So - when does your hibernation end?  It better be soon...