Recap: Scola shines in a Rockets 98-94 win over Portland

Share All sharing options for: Recap: Scola shines in a Rockets 98-94 win over Portland 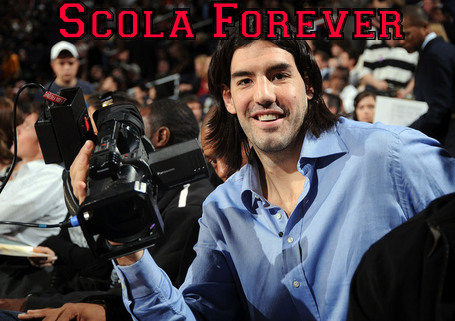 Led by Luis Scola, the Rockets were able to squeak out a 98-94 home win against the Portland Trailblazers on Tuesday night.

Movin' on up.  We are now the 4th seed in the Western Conference, only one game behind a Denver team that we have beaten twice.  With all of that said, our playoff seed doesn't matter until the final day of the season.  As long as we can hover within the 3-5 range, we'll be setting ourselves up nicely for a playoff run.

As for tonight, it was a tale of two halves.  The first half was beautiful.  Ball movement, hustle, and a cornucopia of swishing nets.  We also put the clamps on Portland defensively, holding them to 43 points and forcing a large amount of contested jump shots.

Then the second half began, and our lead began to slowly dwindle.  While we maintained the effort and intensity that we exhibited in the first half, our ball movement died.  After having 15 first-half assists, the Rockets only had 5 in the second half.  And as Portland drew closer, we continued to struggle, attempting to go one-on-one on numerous occasions.  The more Portland scored, the less we scored.  Yao Ming was unable to find a rhythm, which left us without a consistent go-to guy down the stretch.  Somehow, we managed to go scoreless for 6 minutes in the fourth quarter and still get a win.  It certainly helped that Ron Artest and Aaron Brooks went 4-4 from the free throw line in the final minute.  So that was nice to see.  Here's your Recap:

Luis Scola -- My Friend From Argentina was all over the boards tonight.  He even had a stretch in which he grabbed 3 offensive rebounds on the same play.  Scola kept many plays alive tonight, and on a sidenote, he went 5-9 for 15 points.  His jump shot wasn't falling, but I am still proud of the fact that he has a jump shot.  Hopefully it will fall against Cleveland on Thursday.

Aaron Brooks -- The Original Midget had 20 points tonight, and while it was on 8-20 shooting, a few of those misses came on drives to the basket, which I am fine with.  As long as he keeps the energy up, keeps painting, and keeps the turnovers down, Aaron will be an effective starter for us.  The two assists are a bit of a downer, but the two turnovers are nice to see.  He is also shooting it well from deep (2-5 in this game).

Shane Battier -- Shane played a wonderful defensive game tonight, forcing Brandon Roy to be terribly inefficient.  Roy went 10-23 (0-4 from three), and only took four free throws.  He also turned it over three times.  As for Shane's offensive game, he went 3-6 from the field and 2-4 from three, with no turnovers to speak of.  Just another solid night for "The No-Stats All-Star."

Yao Ming -- Yao couldn't get it going tonight, as he shot 6-15 from the field en route to scoring 15 points.  He also had 5 turnovers, and was marked absent during the stretch run.  He may as well have been on the bench.  The problem for this team without Tracy McGrady is our lack of a go-to guy in the clutch.  I don't think Ron Artest is that player.  It has got to be Yao.  The difference between what Ron's role and Yao's role in clutch time is simple:  Ron is a good Plan B.  He can hover around the perimeter and assist Yao if need be.  But our Plan A, our go-to guy, should be Yao.  And he didn't even sniff the ball in crunch time tonight.  That's a major problem for me.  Oh, and Joel Pryzbilla did a lot of this tonight too. 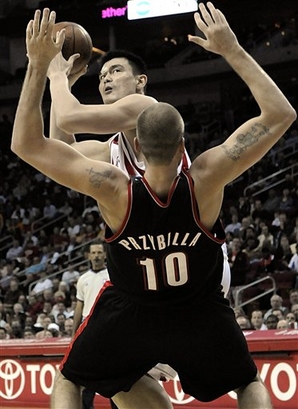 Brent Barry -- You're the man, Bones, but 0-2 from three won't get you off the 'down' list, especially when everyone else played so well.  And it's kind of difficult now that I can't just stick Rafer here anymore.

Nicolas Batum Scouting Report -- Since when can our former first round draft pick shoot threes?  He went 3-3 tonight from downtown.  Disgusting.

"I thought every day was Fat Day for us.  I'm sure going to have fun on Fat Wednesday tomorrow."

"...brought to you by Corona, and I bet Ron Artest wouldn't mind using a Corona to wash his mouth out right now."

Kyle Lowry: "The More You Know"

At some point in our lives, we will struggle with tough decisions.  But as a member of the Houston Rockets, one should be aware of something very important:

Never give the ball to Yao while he is on the run.  It will only result in disaster. 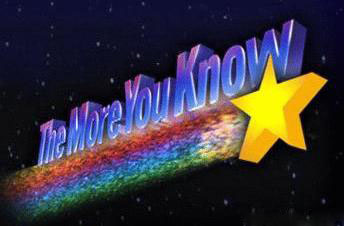 The Luis Scola "Phantom Call" of the Night:

Tonight's Phantom Call was just as bad as the rest.  Luis was backing down Brandon Roy when, suddenly, Roy lunged into Scola's back.  Luis turned to face Roy, threw the ball up in the air, and looked for a defensive foul as Roy melted to the floor.  But no - the refs had a different idea in mind.

Next Game: Thursday vs. Cleveland.  Let's keep this streak alive.