Rockets Notes: Who is our clutch player?

Share All sharing options for: Rockets Notes: Who is our clutch player? 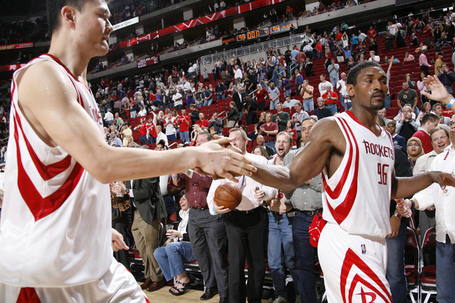 Entering Thursday's game against the LeCavaliers, the Rockets are in the midst of a five-game winning streak that includes wins over Dallas and Portland.  While Jason Terry and Greg Oden were absent from those games, each victory still served as a confidence boost, and the Rockets will gladly welcome any available self-esteem into the locker room.  Let's take a look at what went down this past week, mainly in the Portland game:

I'll focus purely on the Portland game here.  In the first half of the game, our ball-movement and off-the-ball movement was phenomenal, and our spacing as well as our ability to cut and get open allowed us to build a big lead despite having Yao on the bench.  Players cut through the paint constantly, clearing up driving lanes for Ron Artest, Aaron Brooks, Kyle Lowry, or Von Wafer.  And when one of those players wasn't attacking the basket, they were out on the perimeter waiting for a kick-out pass.  If the drive wasn't there, we stuck three players up at the three point line and moved the ball around until we found an opening.  It was a guess-and-check offense, and it worked very effectively.

We also got out on the break in the first half, and by the third quarter, we had 12 fast break points.  It's no surprise that our sudden surge in back court speed has something to do with this.  Lowry and Brooks ran some great fast breaks, getting as deep in the lane as possible before dishing the ball to a cutting player.  And give credit to Wafer, Artest, Scola and Battier for running the floor.  Often times, when Rafer Alston would run a fast break, we wouldn't give him much help.  Our defensive tenacity led to a few turnovers, and our ability to turn long rebounds off of jump shots (and there were plenty of jump shots) into fast breaks contributed to our 17 point halftime lead.

Then, we slowed it down.  Even in a half-court offense, there can still be plenty of movement and speed.  Often times, people confuse an effective half-court offense with a "fast-paced" team or "D'Antonian-style" offense.  The difference between the two is that "fast-paced" teams will settle for outside shots as long as it doesn't take too much time off the shot clock.  And of course, any chance they get to run the fast break, they'll take advantage of it.  Our half-court offense needs to be filled with constant movement, but as long as we get a good shot, it doesn't matter how much time we take off the shot clock.  In the second half of the Portland game, our off-ball movement and cutting dissolved, and we began to stand around and watch players go one-on-one.  We also fed the ball to Yao, which is nice, but if we don't cut or rotate on the perimeter to give Yao a good passing lane, we're essentially ending the possession by handing Yao the ball, something that is not very efficient.  Thankfully, Luis Scola was a beast on the offensive boards and was able to extend our possessions after Yao missed.

Keep it moving!  We don't have to be the Suns or Warriors, but we can't just stand around.  Yao's presence in the paint can't be an excuse for us not to continually move toward or away from the ball.  As for the fast break, if it's there, run it.  We definitely have the speed to turn a long rebound or turnover into quick points on the other end...as long as Yao isn't a trailer on the run.

Something that stood out to me last night was that nearly every jump shot was contested.  The Rockets are terrible at blocking shots, but what they lack in shots blocked on a box score, they make up for in shots contested.  It was evident that the effort to close out jump shooters was there, when, on many occasions, we would close out shooters who in past games we would have left wide-open and hoped for the best.  Our commitment to harassing the opponent in any way possible, even if it means merely sticking a hand in a face, was on display for the majority of the Portland game.  Without some stops at the end, that game could have easily been lost.

Chuck Hayes played a hell of a game, and it became apparent that as long as Chuck was in the game, the paint was off limits.  I posed a question to the game thread after noticing this: "If Carl Landry had been in the game, would our opponents be driving to the paint and getting dunks/layups at will, such as in the Philly game?"  After some thought, I've decided on one of those "yes, but" answers:

Player Notes: Kyle Lowry is not forcing the action...which is a good thing

I've been as pleased with Kyle Lowry as a fan can be with a player that is averaging only 4 points per game in only 3 games with a team.  But Lowry has played very effective in his 48 total minutes as a Rocket thus far.  My reason for liking his performance isn't so much about what he has done, but instead, what he hasn't done.

As much as Kyle was criticized for being a bad three-point shooter after the trade was made, he has only attempted 2 three pointers in those 48 minutes of playing time.  And each of those was WIDE open...as in, if he hadn't shot the ball, Ricky may have pulled him out.  He has yet to miss a free throw, and every jump shot he has taken has been a last resort.  The only instances in which Lowry has really "imposed his will on the game" have been on hard drives to the basket, something that Lowry does very effectively.  I'm always happy when our point guards are getting in the lane.

Kyle played his best game against Portland, as he racked up 4 assists to go along with 4 points and 3 rebounds in 15 minutes.  And those statistics, while not the prettiest I've ever seen, are from a guy who has been somewhat relaxed so far.  Lowry was also running the fast break well, and his defense hasn't been All-NBA up to this point, but he is still learning to play with this team, and as long as he is getting beat at full-speed, I can't be disappointed...for now.

Who is our clutch player?

With help from 82games.com, I'm going to dive into a little clutch speech.  Just for fun, let's take a look at each Rocket's points per game in clutch time, which 82 Games defines as "The 4th quarter or overtime, less than 5 minutes left, neither team ahead by more than 5 points."  Observe -- each ppg average is by 48 minutes.

A few things to remember when looking at those statistics:

3. Lowry and the others below him have yet to take a shot in clutch time with the Rockets - therefore, they do not count.

Based solely on this data, it cannot be stressed enough that Yao Ming is our go-to guy in the clutch and not Ron Artest.  While Ron is a good shooter from outside and can get to the basket, he's not great at creating his own shot, and his FG% inside the arc this season has been poor to begin with.  Scola, Brooks, and Wafer also may look like attractive options, but their numbers pale in comparison to Yao's, and to go against the statistics for a second, let's face it: who do you want with the ball in crunch time?  Yao or Von Wafer?  I'll take the Ming Dynasty for 3 billion, Trebek.

If you want to look outside of those statistics, look no further than basic fundamental statistics.  Yao is our best shooter close to the basket, and if he is fouled on a play, he is going to make his free throws.  Remember the last Portland game?  The Brandon Roy shot wouldn't have happend had Yao not given us the lead by sinking a clutch free throw.

That's enough from me.  Let's go out and get a big win Thursday night.