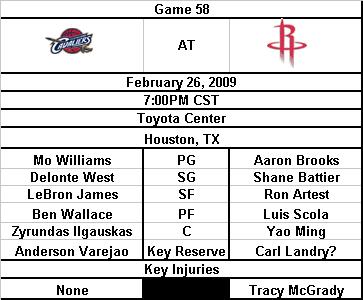 Point Guard
Brooks - 8-20 is scary, it's not what I want from him.  He was just two missed shots from having a great night shooting though and some of those shots normally fall for him.  Still, I want him to shoot 12 times at most unless 50%+ of them are going down.  He's going to be huge against the Cavs though, HUGE
vs.
Williams - Good player made great by playing with Lebron.  He's been horribly underrated his entire career, but now has gone over to the overrated category.  He's at less than 2-1 assist to turnover ratio and his rebounding numbers are down.  To his credit, his shooting from the field and free throw line are very good and he is a very good player.
Edge: Cavaliers

Shooting Guard
Battier -
vs.
West - Reports say that West should be back.  He's clearly benefiting from playing with Lebron and getting no focus from other teams, but he's a decent player and if he's your fourth best starter on your team, your doing something write as a GM.  Daniel Gibson isn't a bad fall back if he can't go, but the Cavs seem to like him off the bench.
Edge: Rockets

Small Forward
Artest - He will take this game personally and I'm a huge fan of that.  LeBron will have Artest and Battier switching over to him constantly.  Crazy Pills has been phenomenal since McGrady went down, and I still will be dissapointed if the Rockets don't sign him for the longterm.
vs.
James - I still think that Kobe Bryant is the best player in the league and I would start a team with Chris Paul first, but LeBron has more potential and has already achieved more than any player ever has at his age.  He's the King of the league and I truly enjoy watching him play
Edge: Cavaliers - As usual, SF/SF matchups with the Rockets are the most fun to watch

Power Forward
Scola - I've run out of superlatives for how he is playing, so I present a question: Is it just me, or does everyone else think that Scola would be completely awesome to hang out with?  I guarantee he knows all the cool places to go everywhere he travels to.
vs.
Wallace - I really thought that this Cavalier's team would be a great fit for him.  He's in the spot he needs to be, just there to clean up the mess, yet he's not doing it.  Cavs fans, what am I missing?
Edge: Rockets

Center
Yao - After the game Yao said "Wait until they come to Houston".  He had gone 3-10 from the field because the Cavaliers were hacking him left and right.  It was a game that he could have gone to the line 45 times and yet only took 10 free throws.  (Not sour grapes, the Cavs won that game on their merit).  His performance in this game is going to be legen- wait for it
vs.
Ilgauskas - Gives Yao problems based on his size, it won't matter Thursday night, mark it down
Edge: Rockets - DARY

Houston Rockets
OUT - Tracy McGrady, for the season it appears

Cleveland Cavaliers
OUT - Sasha Pavlovic is out and Delonte West is expected to play.


My Prediction: The Rockets will win, period