Share All sharing options for: Recap: Yao, Wafer light up Toyota Center in 93-74 bashing of Cavaliers 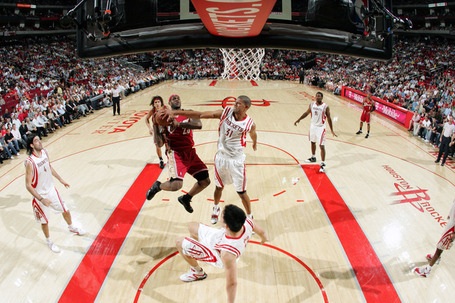 Note: Much thanks to guest recapper Jay Row.

Remember when the Rockets were poised to hand Cleveland their first home loss of the 2008-2009 season, but were hindered by horrendous officiating?  That was December 23, 2008.  After being taken out of the game by the officials, an angered Yao Ming stated, after the game "I just want to say, see you guys in Houston".

Tonight, we got a fairly officiated game.  However, that's not the only difference between tonight's game and the game over two months ago.  In fact, quite a bit of things have changed in since the aforementioned first game between these two teams.  It seems of little use to name all the differences, as we all know the changes this roster has gone through as of late.  I'd like to point out that Tracy McGrady spent 30 worthless minutes on the court throughout the first game, being less productive than Von Wafer was in 19 minutes this time around.

Face it: This team is better without Tracy McGrady.  People have been suggesting this theory for a long time, and I finally have given in.  Tonight's game was a masterpiece.  For the most part, the offense was fluid.  We were either running motion offense, or pounding it inside to Yao.  The latter frequently resulted in a bucket by Yao or a kick out and series of swing passes, with an easy bucket being the resultant.

Tonight, I am proud to be a Rockets fan.  The team played with heart, hustle, and huffert (did I really make a sad attempt at alliteration, while including a Matt Bullard create-a-word?).  If I could describe our new-look team in one word, it would be consistency.  We are consistently displaying great qualities.  Consistent defense, consistent hustle, and consistent offense.  Oh yeah, and Luis Scola, Mr. Consistency!

On to the awards, in true BBN fashion...

Yao Ming - Yao was on a mission tonight.  Tonight was Yao Ming vengeance night for how he was mistreated in Cleveland on December 23, 2008.  Yao shot 13/15 from the field, and for all you who are not fond of math, that's an astounding 86.7%.  He was our go-to guy all night on the offensive end.  Good work, Yao.

Von Wafer - Barring a few bad decisions during his first few minutes on the court, Von played a terrific game.  Instant offense, anyone?  In 19 minutes, he chalked up 19 points.  He hit some big threes to keep our big lead in the 4th quarter.  Big ups to Baron Von Wafer.

Ron Artest/Shane Battier - How can I give an "up" to a combination of players who shot 6/18 from the floor tonight?  Because they shut down LeBron James.  Whether it was Ron fighting through screens and contesting the shot, or Shane getting in perfect position to draw two offensive fouls, these two players are a great match of defensive talent.  Somebody, please come up with a nickname for our new defensive combo.  They are just as deserving as Luis Landry.

Luis Scola - Since I couldn't decide who didn't belong here, and I sneaked in an extra player by combining Ron and Shane, I will make this brief.  14/9 night from Mr. Consistency.

Chuck Hayes - Hayes played 9 minutes tonight and really didn't show much except for a couple of missed layups and average defense.  It disappoints me to see how he's regressed this year.

Brent Barry - Barry missed some open shots tonight that could've helped us while we were struggling to score in the first half.  Tonight reminded me of the beginning of the season for Brent, but I'm sure he'll bounce back.

Hey, I got in six awards. Since we played such a good game, I should be able to move a down to an up, right?

More like quote of the year.  From Ron Artest in a pre-game interview:

"Lebron James is like a new and improved Ron Artest."

Next Game: Saturday at Chicago.  And some of the Kings.