Breaking down Ron Artest and his whacky shooting numbers

Share All sharing options for: Breaking down Ron Artest and his whacky shooting numbers 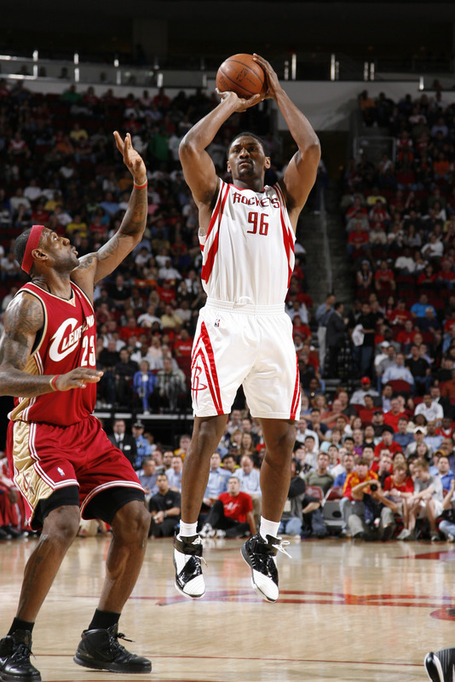 Take a look at Ron Artest.  Based off of his gargantuan size and incredible strength, you'd figure he would make his living as close to the basket as possible.  NBA coaches used to beg for this to be the case.  But Ron likes to shoot it from outside - he always has.

Take Tim Floyd, who coached Ron in Chicago during Artest's first two NBA seasons.  I'm sure Floyd particularly resented Ron's obsession with chucking it from deep.  And with good reason: Artest only made 31.4% and 29.1% of his three-point shots during those two respective seasons.  And yet, he still took 2 to 3 three-pointers per game.  Said Ron of his relationship with Coach Floyd (in 2002):

"With [Floyd], you had to worry about getting yanked all the time," says Artest. "[Coach Bill Cartwright] lets me play. I'm not afraid to take a fadeaway, take a three in transition, take it coast to coast."

Anybody willing to bet that, more often than not, Ron hit the pine for shooting an ill-advised three-pointer?  He didn't sound like a very smart shooter back then.  He's still doesn't exactly possess the greatest shot-selection of anybody today either.  But for some reason, those three-pointers are suddenly starting to fall.  And by "fall," I mean that Ron is making threes at a higher rate than one Ray Allen.  He's had a downtown renaissance in 2008-2009.

Oddly enough, it is the only shot that has been consistent for him this season. 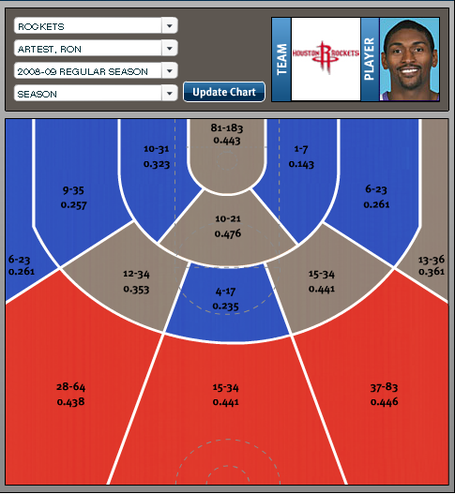 I've been stalking Ron's shot chart all season long.  He recently raised his layup percentage above his three-point percentage (which was quite possibly the strangest shooting statistic I had ever seen).  To elaborate further, Ron is only shooting 39.4 percent this year, his second worst FG% of his career.  And yet, his three-point percentage is a staggering 41.1%.  How is this happening?  Aren't three-point shots supposed to be more difficult, especially for a 6-7, 246-pound monster?  Simply put, yes.  But what if we're overlooking something?  How about the fact that Ron has quietly progressed from behind the arc every year since his move to Sacramento?

I talked to Tom Ziller from Sactown Royalty and asked him to briefly sum up Ron's outside shooting ability, at least during his tenure as a King.  Tom's response:

He was bad in 05-06, better in 06-07 and actually good in 07-08. His shooting is a bit underrated; he has a tendency for long twos, and threes off the dribble. Those are bad. But when he sets and shoots, his stroke is fine.

From my observations of Ron as a Rocket, and based off of Tom's thoughts, not much has changed.  In an article that CelticsBlog's Steve Weinman wrote earlier this year, he quoted Ziller as saying of Ron's shot selection, "He makes extraordinarily odd decisions on offense.  Repeatedly."  In short, this could sum up Artest's first month with the Rockets, when he shot around 33% from the field.  This proceeded to kill his FG%.  In other months, Ron has shot 42%, 41%, and 44% from the field.  As the season has progressed, his shot has progressed as well.

A number of things contributed to Ron's shooting woes over the first part of the season.

By the end of the season, as Ron improves his jump shot and finds a groove, his overall FG% may finally exceed his shooting percentage behind the three point line.  But for the sake of it, let's think about how he could be shooting so darn well from behind the line for the first time in his career.

What's with the high three-point percentage?

Out of all of the contributions I expected Crazy Pills to bring to our team, three-point shooting was never one of them.  What has contributed to this?

In summary, Ron's interesting shooting statistics have been somewhat of a downer, as we expected more than a 39 percent shooter when we traded for him.  And yet, his three-point shooting has been excellent for us, primarily because, among other reasons, he is able to take set shots as opposed to forcing up jumpers off the dribble.  As the season has moved along and improved for the Rockets, so too has Rawn, and with the stretch run coming up in a few weeks, he is going to be counted on not only to hit shots from the outside, but from any spot on the floor when he is open.  When he is open...