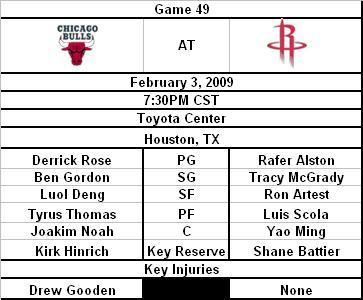 Point Guard
Alston - His last 3 games have been been brutal. Yes, he had 9 assists two games ago, he also shot 3-11, also known as more times than Yao shot. He was playing so well for a time there. Maybe the Rockets can get by with Alston and Brooks staggering who is on.
vs.
Rose - I don't understand any argument that says he's not the Rookie of the year. The fact that he's a PG and Mayo is a SG is enough for me.
Edge: Bulls

Shooting Guard
McGrady - His first game back after injury was a good one, until the end anyway. Could he have really realized after the New York game that he needs to be a team player? Only time will tell. Here's hoping it starts tonight
vs.
Gordon - He and the Bulls have an odd relationship. Some of them love him, some hate him. I really think he's a good player and would dominate on the Rockets
Edge: Even until Tracy can prove he's a full on team player

Small Forward
Artest - Played like a Golden god against the Warriors, but their D could make me look like Matt Maloney in the NBA, and that's a big upgrade for any non-NBA player's game.
vs.
Deng - He's paid 2 million dollars more than Artest this season for less production
Edge: Rockets

Power Forward
Scola - He was very active against the Warriors but the points and boards didn't come easily. He scored well and shot better than 50% but with Brooks, Yao and Artest all going over 20 the Rockets didn't need him to score more.
vs.
Thomas - Starting with Drew Gooden out he's been decent and giving the Bulls all that I think he has.
Edge: Rockets

Center
Yao - 27 and 14 tonight, book it
vs.
Noah - He plays great for 3-4 games and then completely dissapears. I know he's young, but I expected more out of him. I thought he would prove his doubters wrong. He still might, but he has not lived up to my expectations. Part of that is the fact that he is playing Center while he is a power forward.
Edge: Rockets

Injuries
Houston Rockets
OUT - None

Chicago Bulls
OUT - Drew Gooden, I know the note above saying none is incorrect, but it's Drew Gooden!

My Prediction: 9 point win, and here's hoping for a trade for Kirk Hinrich while we're at it!