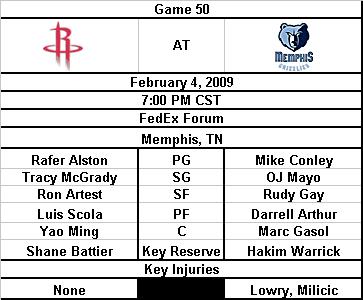 Point Guard
Alston - The Waterboy's Mom said that alligators are so ornery because they got all them teeth and no tootbrush. My Mom said if you can't say anything nice then don't say anything at all. I know his momma was wrong, but I think mine is right.
vs.
Conley - Not nearly as good as Memphis expected him to be at this point. Especially considering they already had a young PG on the roster in Lowry when they chose Conley. He's too fast and too athletic to not be at least serviceable over his career though.
Edge: Even

Shooting Guard
McGrady - I am very high on McGrady's game versus the Bulls. He shot the ball with some intelligence, took it to the hole a few times and didn't go three point shot crazy. He also had 3 rebounds to go with 6 assists versus only one turnover. That's a great night from him. He'll D up OJ Mayo tonight, he just about always does that with the young up and comers.
vs.
Mayo - He's a much better player than I expected him to be in his first year. He's not very selfish from what I've seen and he can score on just about anyone. As with all young scorers his defense needs some work, but from what I can tell he's probably willing to do that work. Good player with the strong possibility of being great.
Edge: Even

Small Forward
Artest - Ron had the type of night I want him to have as a base level against Chicago. 10 points and 6 assists. His passing is underrated and he sees the court very well. Adelman needs to do everything he can to ensure that he and Tracy McGrady are not on the court at the same time though.
vs.
Gay - I know that some Rockets fans still hate the Shane Battier trade. All I can say to that is, I disagree. Gay is a good player, but he's far from a star. Yes he is hellaciously athletic, but if his points per game versus his actual game don't scream I'M A PRODUCT OF PLAYING ON A CRAPPY TEAM, then I don't know what is. I think he'll get there, but it will be after he signs a free agent deal elsewhere.
Edge: Even

Power Forward
Scola - The best hustle PF in the league. I think that has firmly been established now. He can do everything you need.
vs.
Arthur - Loved him in college, still think he's a bit of a knuckle-head (in my best grandpa voice). He's never going to be a big time scorer, but he can certainly have a long career as a rebounder and he has a decent around the basket game.
Edge: Rockets

Center
Yao - While Marc isn't a pushover on defense like his brother is, he still cannot guard Yao.
vs.
Gasol - Seriously, in 2 years everyone will be saying that the Grizzlies won that trade.
Edge: Rockets

Injuries
Houston Rockets
OUT - None


My Prediction: Rockets by 14