Is Luis Scola the Rockets' MVP?

Share All sharing options for: Is Luis Scola the Rockets' MVP?

A simple disclaimer before we begin...

Luis Scola is my favorite Rocket not named "Yao Ming."

That said, I must admit I was a little surprised to see the e-mail I got from the Rockets Insider this morning.  Suggesting that Luis Scola has been the best player - or at least the most valuable player - on the team this year.  And this concept is fully supported by the guy who went to Duke:

"No ifs and or buts, he’s been our MVP," says Battier. "He’s been so solid for us. Every night we can not only count on his rebounds, but his passion and energy – he never takes a night off. He has been the foundation that has held this team together to this point."

Hard to argue with a lot of that.  Scola has been a model of consistency and effort.  Even when the team quit against Toronto and sleepwalked against Philly (twice!)... there was Luis Scola busting his ass up the court to get position and maybe an offensive rebound.

Which makes it even harder for me to understand why Rick Adelman wouldn't let Scola play much of the fourth quarter in the first half of the season...

Nevertheless, as great as Scola has been (and he could be even better if they ran more plays for him)... can anyone reasonably say that the team MVP is not the 7'6" Chinaman??  Preferred nomenclature or not... Yao Ming is the Rockets' MVP this year.  He's missed all of 3 games (plus 80% of the Indiana game when he was injured early on).  With Tracy, Battier, Artest and others being injured and ineffective, Yao has stood tall throughout.  He's your MVP.  And Yao should get some NBA MVP votes too once this season ends.  Especially if the Rockets approach 55 wins.

But it's nice to see that Scola is getting the proper recognition.  Finally. 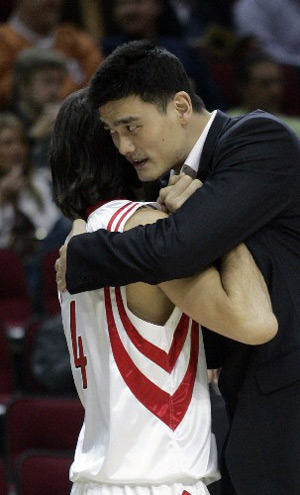 Of course, let us not forget... Scola has a gold freakin' medal, too.  He knows how to win at the highest level.  When the playoffs roll around, he will not shrink from the moment.  And yes, because of Yao and Scola -- the Rockets will be going to the playoffs.  Of this I have no doubt.